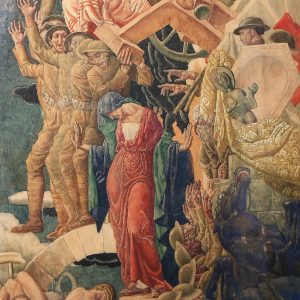 An epic and poignant large allegorical preparatory painting by Eugene Savage for the mural titled Armistice, which was created for and still resides in the front reception room at The Elks Veteran Memorial in Chicago's Lincoln Park neighborhood. At the opening reception in 1926, Arthur Correy the then president of the National Society of Mural Painters called these works the most important event in American mural painting, Savage was awarded the Gold Medal of Honor in 1929 by the Architectural League of New York. 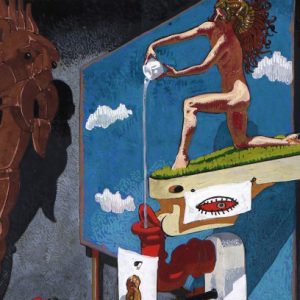 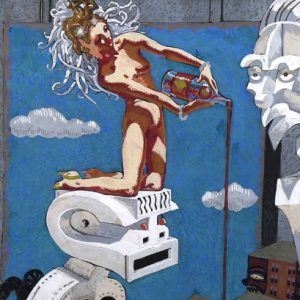 The fourth of ten 1939 mural designs by Mahlon Blaine, which were intended to become murals for the studio or showroom of noted New York City interior designer Paul MacAlister. In "The Toast of Manhattan" a nude goddess with serpents for hair pours a martini for a tuxedo clad robot as the adjoining stone masonry watches on disapprovingly. Even the tenements have eyes in this surrealist and inspired visionary artwork. Marked on verso design #4, this comes beautifully matted and framed from the estate of Paul MacAlister. 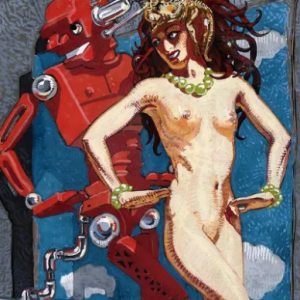 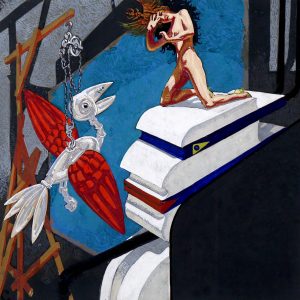 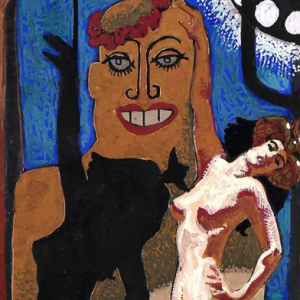 In this work, the first of the series, and the image that was to greet visitors as they entered the room, a nude showgirl dancer does a sad burlesque, her shadow duplicated in silhouette in a Coney Island funhouse style. Both evoking and critiquing the sordid and semi-underground world of Depression-era girlie shows, the artwork lures the viewer into the underbelly of the city that is explored in the nine images that follow. 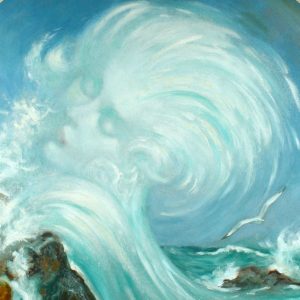 Grapefruitmoongallery is proud to offer one of 3 original commissioned large circular oil paintings that adorned the restaurant walls of Larue's a legendary Hollywood, Sunset Blvd. haunt that was owned by gangster character actor Jack LaRue. Henry Clive was a frequent patron and close friend of LaRue, and this painting, titled Spirit of Capri was purchased directly from the restaurant about 45 years ago by the artist's son Henry Clive O'Hara. In addition to being a prolific cover illustrator for Randolph Hearst's American Weekly, Clive painted several large risque and attention garnering commissioned mural works for Hollywood landmarks like The Jade and The Masquers Club as well as LaRue's. 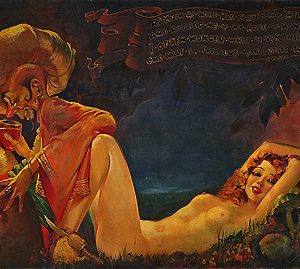 Along with its companion work "Ye Chiselers" (previously sold through Grapefruit Moon Gallery), Clive created this masterwork for the tavern of The Masquers Club, a historic and fascinating Hollywood institution. A reclining redheaded flapper is seen consorting with a Persian genie of sorts, illustrating the verse from the Rubaiyat which is inscribed on the mural.