Grapefruit Moon Gallery is honored to be able to once again offer “Ye Chiseler – Yo Ho Ho And a Bottle of Rum,” a large, commanding, seductive and masterful mural created by Henry Clive, to our eyes the finest illustrator working in jazz age Hollywood. Clive created this masterwork for the tavern of The Masquers Club, a historic and fascinating Hollywood institution. Known for the sense of community it created among the actors and directors who emigrated out to California to create the movie industry, the Masquers put on wild shows in their clubhouse, and produced short films starring everyone from Laura LaPlante to Glenn Tyron. From its charter in 1927, the club has stood as a stronghold of love, loyalty and laughter for cinematic royalty. Charter members of the historic Hollywood institution included Lionel Barrymore, John Ford, and Fatty Arbuckle, names synonymous with the Golden age of film. Later notable Masquers include Tony Curtis, Jimmy Durante, Gene Autrey, and Gary Cooper. The buoyant spirit of the Masquers (and their New York cousins the Lambs) is embodied by their motto “We laugh to win.” 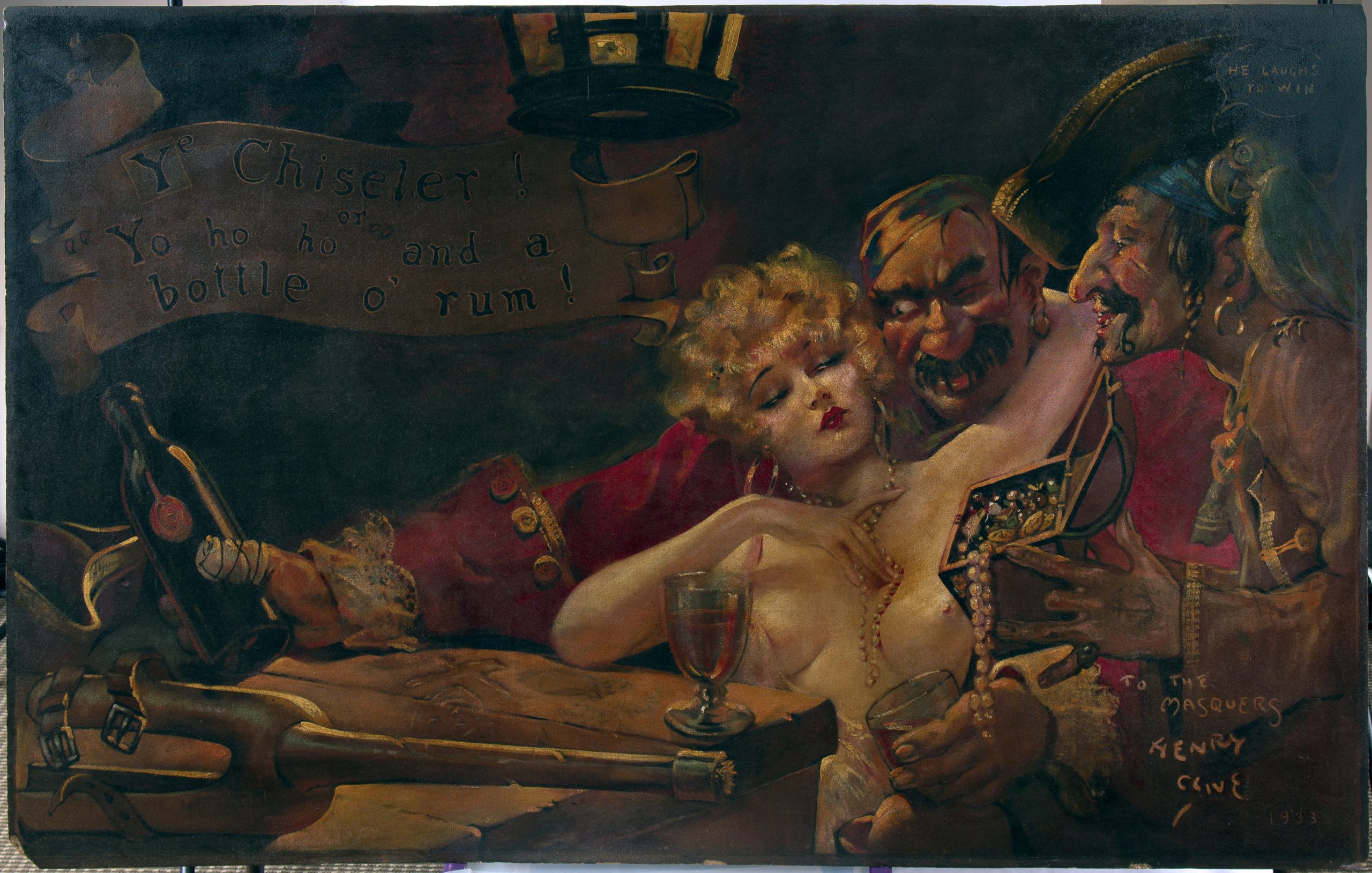 The tavern was the heart of the Masquers club, and the Masquers club was for many the heart of Hollywood. The lustful spirit of jazz age Hollywood pervades “Ye Chisler”. Rumor has it that Clara Bow, a frequent visitor to the clubhouse, was the model for this enchanting mural. Seducing a pirate, whose parrot nonchalantly repeats the Masquers slogan, Clive’s nude, bow-lipped blonde certainly is infused with the spirit of the flapper “It” girl. Throughout the well-rendered, colorful, remarkably preserved mural, we get a glimpse into the provocative joy of the jazz age and the brilliant artistry of Henry Clive. 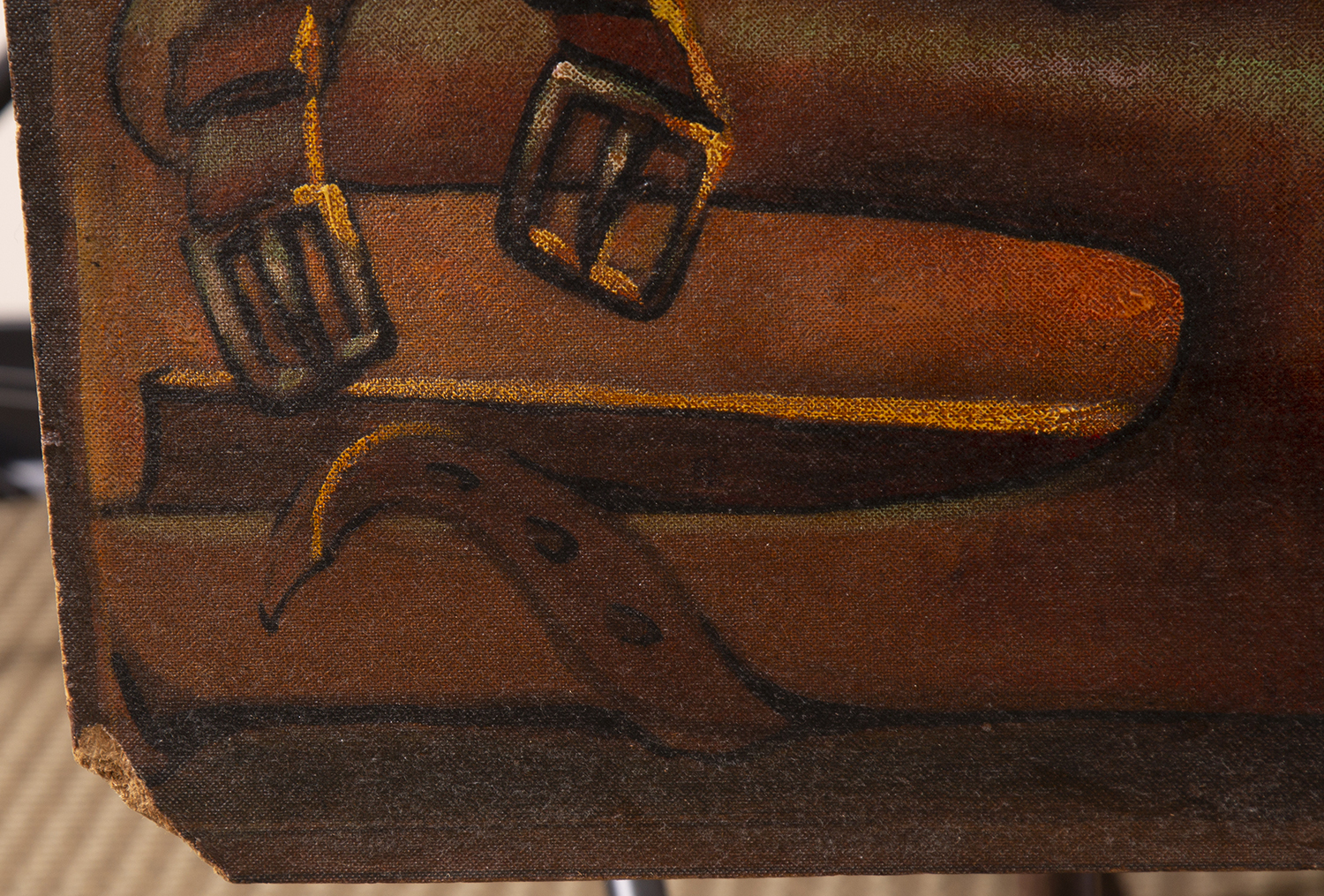 In 1975, upon the 50th anniversary of the Masquers club, they set the scene of the murals, and reflected upon Clive’s relationship with the club.

“One envisions the two magnificent oil murals by Henry Clive at either end of the bar in the downstairs tavern. On that back bar also, are those two beautifully carved cherrywood Afro-nymphs [also available on Grapefruit Moon Gallery] and the Masquers logo suspended above them, by Stuart Holmes… As the dedicated bibbler and art critic descents into the bar he surely must feel a gentle surge of titilation as he gazes on yet another pink-nippled nymph by Clive which, incidentally was adopted by the Masquerettes some years ago as their eye-catching logo.” The joyfully lustful description above shows not only the long standing close relationship the bon-vivant Henry Clive had with the fraternal group but also, the intoxicating excitement of the private club during the lawless era of prohibition.

Once thought lost, Grapefruit Moon Gallery is honored to be able to offer this tremendous and important artwork, and to recapture some of the history and culture of 1930s Hollywood. Recently showcased at a Los Angeles museum show, “Ye Chislers” is a defining example of art deco illustration and a delight to behold. Though the clubhouse at 1765 N. Sycamore Street no longer stands no longer stands, its spirit lives on. The Masquers club, too, is alive and kicking, a reminder that we all laugh to win.