Publishers of depression-era pulp magazines, post war men’s adventure and girlie magazines, and lurid paperback titles all used risqué, action-packed illustrations to make their offerings jump off the newsstands in the highly competitive market for readers attention. Cover art pushed the boundaries of what was allowable in a heavily-censored era, coming up with increasingly deviant and outlandish portrayals of sex, violence, and perilous escapes from danger. Today, these works—which provide an intriguing peek into the shadow side of 20th century American culture—are studied by historians and coveted by collectors.

This original painting by John Hilkert, which appeared as the cover of the Canadian edition of 10-Story Detective Magazine in January 1943, provides an intriguing window into little known moment in pulp art history.

This fresh to the market lively cover painting by Earle K. Bergey appeared as the cover of the winter 1948 issue of the Better Publications title Cartoon Humor. A breezy co-ed pin-up girl in a form fitting red sweater enjoys a snowy sled ride frolic, sending a good natured but clearly over the hill dandy into the powder. He […] A ghastly and macabre pulp cover painting by Mel Hunter for the January, 1958 edition of Mercury Mystery Book-Magazine, this loosely illustrated a story by Floyd Mahannah titled The Broken Angel. A voluptuous redheaded vixen appears in a moodily conceived graveyard at night with an ominous figure in a top-hat looming near an […] 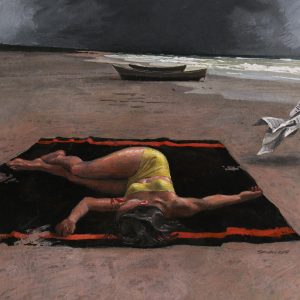 A lurid and outright creepy cover painting by Nicholas Solovioff for the August, 1955 edition of Ellery Queen’s Mystery Magazine, loosely illustrated the interior story Bride In Danger. A beautiful corpse, a once blushing bride on her honeymoon, is now found alone on a desolate beach, bloodied and left in the open […] 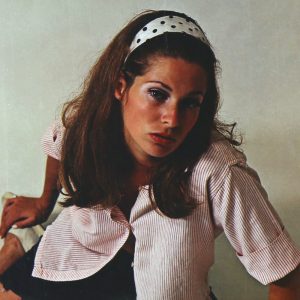 This was the original camera ready artwork used in the production of the 1970 Avon paperback edition of the novel The Favorite Game by Leonard Cohen. 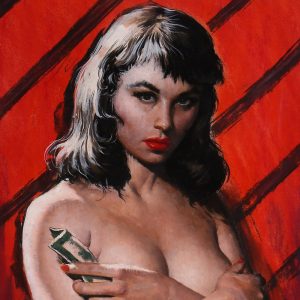 This gouache illustration painting appeared on the cover of Naked Sinner, the 1959 “savage novel of a wild call girl and her shocking immoral affairs”. 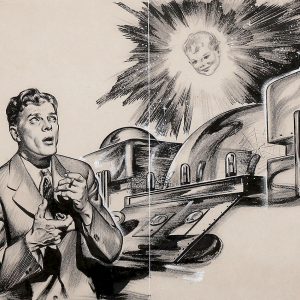 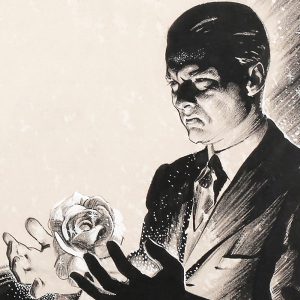 Death Makes a Mistake is an eerie, dark, and foreboding interior pulp illustration by Harold McCauley which appeared in the January 1943 issue of the sci-fi/fantasy pulp magazine Amazing Stories accompanying the P.F. Costello story of the same title. The caption beneath reads “Reggie looked at the second rose, and then he knew…!” Nicely matted and framed under glass, this […] 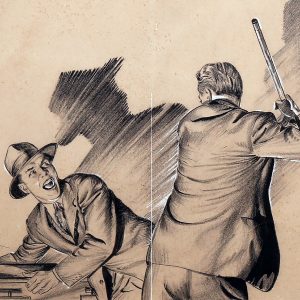 Encounter In A Sinister Place 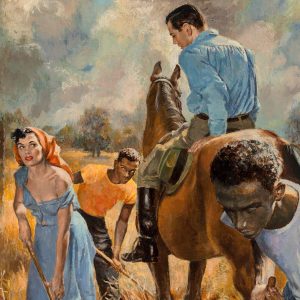 An important and technically masterful large format cover oil painting by James Avati, for the 1950 Signet books release of Love Knows No Barriers written by Will Thomas This cover painting by Tom Beecham for True Strange magazine is comprised of a montage of Marilyn Monroe imagery. 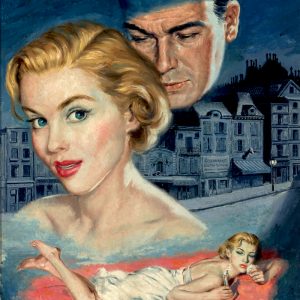 A large format, lurid and iconic paperback cover painting by Verne Tossey that was used as the cover for the 1955 Ace paperback Left Bank Of Desire.