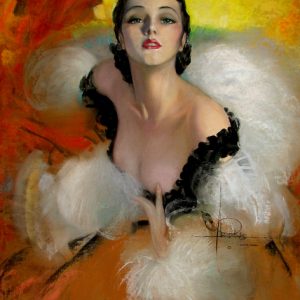 A large and beautiful original pastel by Rolf Armstrong that first appeared as a pin-up calendar for The Thos. D. Murphy Calendar Company under the title “Orchids To You”. Armstrong only created eight artworks for the Iowa based company, and as he was already America’s premiere glamour illustrator when he began working with them, he was permitted to retain ownership of his original pastels. He often reworked these slightly for use as covers for College Humor magazine, during the tail end of his ten year association with the periodical. Staying just outside copyright infringement by removing the orchids from the model’s left hand, and placing a “New York” and “C” for copyright under his distinctive signature, this altered version appeared on the cover of College Humor in March of 1936, the last time an Armstrong girl would grace this title. This pastel appears in a mid 1930s “Armstrong Art Service’s” brochure with the title of “Flower of the North” which is included in sale. 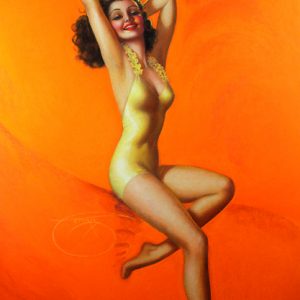 A large and radiant calendar girl pin-up pastel by Billy Devorss created for The Thomas D. Murphy Calendar Company of Red Oak Iowa. Devorss had a studio in New York City in the Beaux Arts Building and worked for many Calendar Companies of the day creating large format pastel illustrations of modernist fashionable attired heart-breakers in an inventive art deco manner.

A Bathing Beauty in Yellow 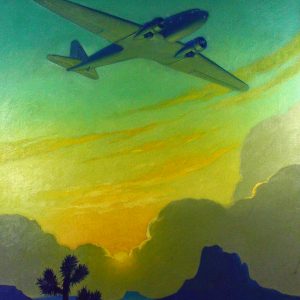 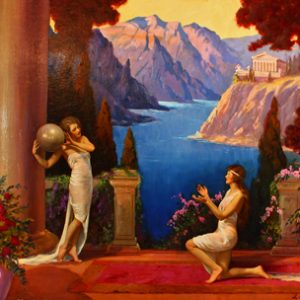 A large, luminous pastel created as pin up calendar art for the Thomas D. Murphy Calendar Company of Red Oak Iowa. This colorful and bright mid-century bathing beauty scene by the artist Paul Kafka was marketed under the title “Sunny.” Nicely framed and properly lined under glass. A multi-image color separation proof series and finished calendar print is included in sale as well as a complete Calendar line Salesman Sample Brochure for the year 1952 titled “The Murphy Record Prize Edition; What Lines!”. Featuring this calendar girl as the cover by The Thos. D. Murphy Calendar Company. 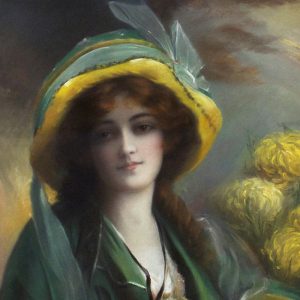 A monumental and important original large pastel illustration on stretched canvas by James Ross Bryson, executed in 1914 for The Thos. D. Murphy Calendar Company of Red Oak Iowa under the title “Reverie in Green”. Bryson was an influential and supremely gifted and handsomely paid American Illustrator who earned a hefty $200.00 per commission for images of his risque for the day, modern enchantress themed Art Nouveau Maiden depictions. This work is housed in it’s original wide solid mahogany gold gilt lined antique frame and is properly lined behind glass. 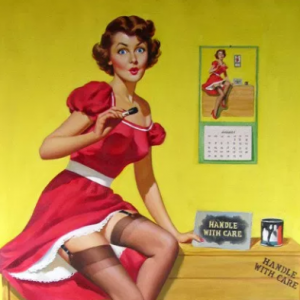 A large, colorful, situationally challenged pin-up girl finds herself in a revealing moment deftly rendered by the infamous Edward D’ancona. This painting, entitled Handle With Care was commissioned by The Thos. D. Murphy Calendar Company; Red Oak Iowa and a large original archived published calendar of this image is included in the sale. A scarce surviving original work by this prolific American cheesecake maestro.