What is Man That Thou Art Mindful of Him? asks this inspirational and spiritual large male nude oil painting by the well-listed New Rochelle based illustrator and artist Walter Beach Humphrey. This new to the market, prize-winning ‘Rock of Ages’ scene was owned for many years by the artist’s daughter, Constance June Humphrey. As a young child in the late 1920s, Constance was a favored model of her father’s friend Norman Rockwell. Humphrey and Rockwell shared a New Rochelle hayloft when they were both starting out. The exceptional provenance and history of the painting evoke the spirit of when it was painted and the special talents and life of the painter. 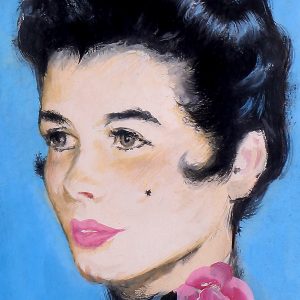 This trio of images by Thornton Utz was created to illustrate a single story in the flagship Curtis Publishing magazine The Saturday Evening Post. With a bold mid-century modern aesthetic and the dry brush gouache technique popular in glossy magazines in the 1950s, the set presents an enticing take on American femininity as idealized during the Cold […] 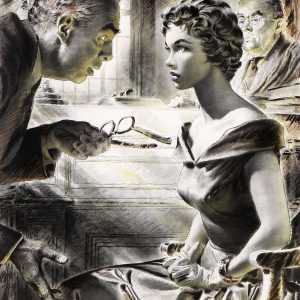 A delicately rendered mixed media work by Edwin Georgi which illustrated an interior story in The Saturday Evening Post. A tense dramatic courtroom portrayal from 1959 which captures the Perry Mason/Earle Stanley Gardner American Pop Culture sensation which was resonating at the time this commissioned work appeared in the Post. The lovely Georgi girl is “Policewoman O’Keefe,” and this work confirms our suspicion that illustrators frequently created their finest works for this highly circulated and revered Curtis Publications slick mainstream magazine institution.

The Girl from the Mimosa Club 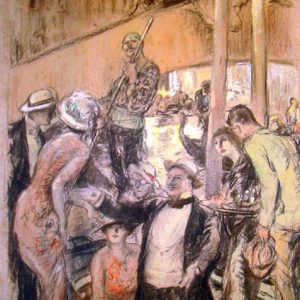 A delicately rendered high society Belle Epoque turn of the century Venice Italy gondola scene . Most likely an interior illustration for The Saturday Evening Post, as Wright was a weekly contributor there. Wright was born in 1872 and a member of the National Academy. He founded an artistic community in Westport, CT, and his works are in numerous museums and galleries . He is listed in Who’s Who in American Art, Davenports, the Artists Bluebook and The Illlustrator in America by Walt Reed. An intensely colored, dramatic and moody, mixed media illustration work by Edwin Georgi, Date With Death, which illustrated an interior story by Leslie Ford in The Saturday Evening Post. The image shows a favorite Georgi theme, the moment of discovery of betrayal in a love triangle. A complete edition of the February 12, 1949 Saturday Evening […] 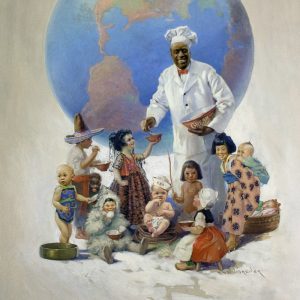 Grapefruit Moon Gallery is delighted to offer The World’s Fare, a rare surviving archived Cream of Wheat original oil painting. This 1923 artwork was reproduced as a full page advertisement in hundreds of American magazines. Featuring the iconic chef “Rastus” feeding a host of ethnically diverse, exotically dressed and cleverly posed children. Along with other selections from the archive, The World’s Fare was loaned out in the late 1980s for a touring gallery exhibition. None of the original paintings commissioned for Cream of Wheat advertising have ever previously been available for sale and we are delighted to offer them. 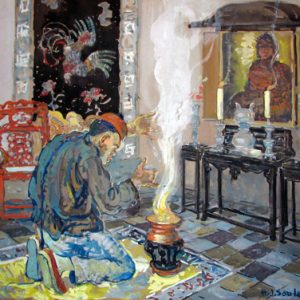 A haunting original watercolor on board verso stamped for use by The Saturday Evening Post by acclaimed American illustrator Henry Soulen. From a pre-air travel era in American popular culture when tastes ran towards the exotic, foreign and mysterious. Nicely framed in a period gesso gold wood frame.

Interior Orientalist Scene at an Altar An outstanding large oil painting by the well listed and prolific fine artist and illustrator Frederick Sands Brunner, this oil on canvas features a pretty red haired sunlit nude with an engaging smile and pretty figure with porcelain white skin gathering water at a stream. The verso bears a foil gallery label for Newman Galleries in Philadelphia where the artist exhibited and sold many of his his works in this genre. 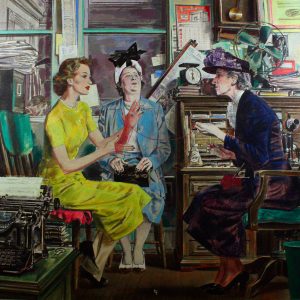 An original published gouache illustration painting on board by the Connecticut painter and illustrator Robert Fawcett. The verso label states this was used in a Saturday Evening Post story titled the ‘Ghost Inn Society’. Signed in initials ‘RF’ and notated as Robert Fawcett on the Curtis Publishing Company verso affixed label. Outside the margins are centering spots for print usage. Image shows three women in discussion in a cluttered mid-century office done in a Norman Rockwell-like Americana illustrative style. Fine condition, well framed. 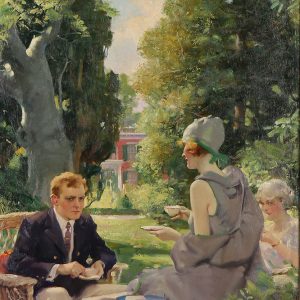 This large and luminous oil on canvas by Charles E. Chambers was created most likely as an interior story illustration for The Saturday Evening Post. Though the piece is unsigned, it contains all of the characteristics of Chambers work, and is undoubtedly an example of his glossy magazine socialites. Dating to about 1930, the scene features a number of refined jazz age beauties in modest yet flapper inspired apparel enjoying a garden teatime with a dapper suitor.

Tea in the Afternoon