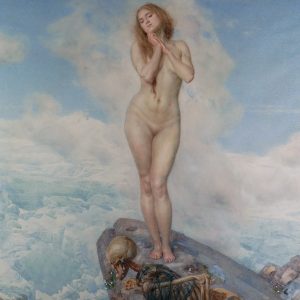 This symbolist watercolor painting by the important Austrian artist Paul Grabwinkler shows a luscious nude on the cliffs with a skeleton at her feet.

The Precipice Of Death 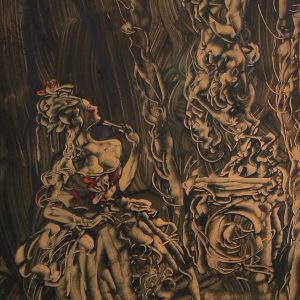 A grotesque and unsavory gathering of creatures is assembled in this inventive signed work which is disguised as a children's fairy tale - in this mixed medium drawing from the German expressionist artist Heinrich Kley. Here two nude nymphs shower yellow flowers upon the body of an upright champion in the heroic mold, while an […]

The Jealousy of Man 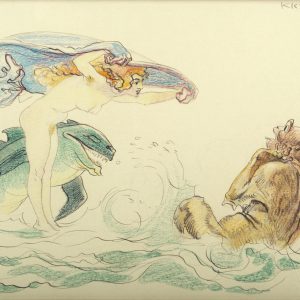 In this whimsically imaginative drawing from the German expressionist and Jugendstil artist Heinrich Kley, a nude water nymph, whose form and pose evoke Venus, frightens away a sea demon as her consort, a dolphin of sorts, looks on laughing. In this mixed medium detailed work, Kley inverts the viewers expectation of women's sensuality in […] 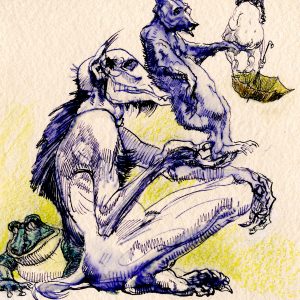 This dark and cleverly conceived and technically brilliant tinted pen & ink drawing with gouache highlights exemplifies the German expressionist artist Heinrich Kley's brooding and satirical vision of mankind. At first take, we see a bear, ogre, and frog cavorting in a circus-like atmosphere, but on further reflection the scene turns darker. Kley's pessimism […] 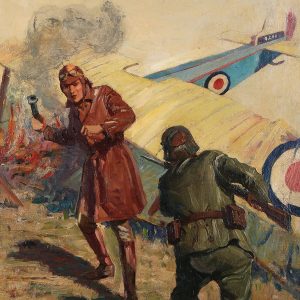 A rare surviving aviation themed pulp cover painting by Stockton Mulford for the cover of Fawcett's Battle Stories, August 1929 (thanks to Doug Clemons for the i.d.). In this dramatic image, a recently downed airplane smolders as the ejected American Air Force pilot, armed only with a wrench, engages in combat against a German, bayonet-wielding, WWI soldier. Aviation pulps appeared on news-stands in the 1920s as the horror of World War I began to fade from public memory leaving room for the development of heroic and mythic tales of soldiers and aviators. Until the start of the Second World War, the aviation pulps focused on these Great War-themed stories, but after 1941, their content switched to tales of glory from the front lines of WWII. 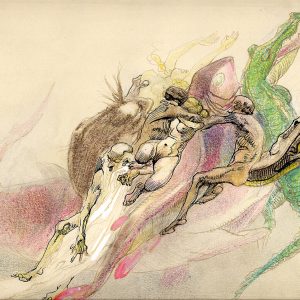 A dazzling Heinrich Kley mixed media work featuring a host of primordial animals engaged in an orgiastic dance of evolution. A splendid cast of characters is assembled by this fondly remembered avant-garde, Jugendstil, German Expressionist artist. This is a rare full color example of the artist's work, most surviving pieces by Kley are pen & ink drawings. This evocative artwork is rich in humor, technique and imagery. Work is in a wonderful state of preservation and nicely matted and framed in a period gesso frame. 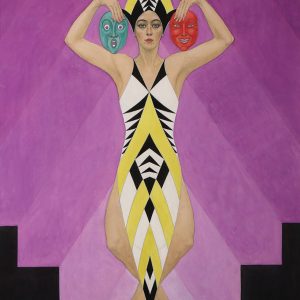 A large and expressive avant-garde gouache illustration painting by noted German/American artist and illustrator Carl Link, the dancer pictured is identified on the verso as Dorsha Hayes. In the late 1920's along with Alberto Varga, Carl Link created numerous covers for the Bernarr MacFadden publication "The Dance" capturing the art deco modernist dance movement in a lyrical and flowing inventive manner. Painting is beautifully framed and matted behind glass and is a defining example from the Charles Martignette collection. 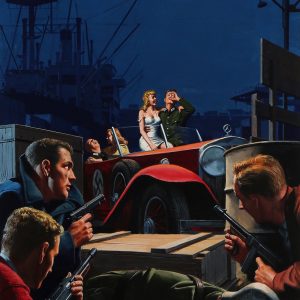 An original gouache on board created for the cover of the September 1962 edition of For Men Only, illustrating the story Operation"Never-Talk:" Shocking Revenge of Norway's Partisan Nymph. (A Smuggled-In Yank And A Wild Anti-Nazi Underground Girl by James S. Wagner. A large finely rendered scene of a bungled SS operation, with a trio of tightly wound American service men, a gathering of inebriated Nazi's and a pair of scantily clad female secret agents acting as decoys. 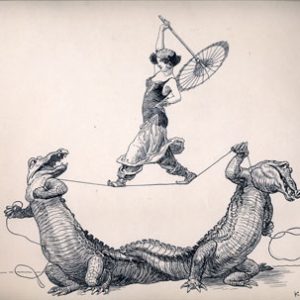 A whimsical pen and ink drawing by Heinrich Kley depicting a pair of crocodiles holding a tightrope for an art nouveau circus aerialist balancing with umbrella. Titled in the corner by the artist Seiltanz or "Rope Walk." A fine example of Kley's dazzling technical skills, work also visits the artist's penchant for humanizing the animal kingdom. Beautifully framed and matted in a period fine gold gilt plein air aesthetic antique frame.