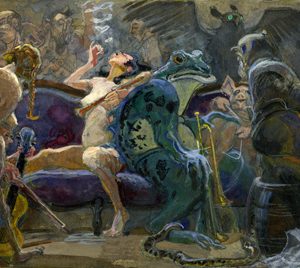 A whimsical and dazzling watercolor by Heinrich Kley titled "Siche Rude Seiten;" loosely translated, "Our Unrefined Side". THe splendid cast of characters captures the essence of this fondly remembered avant-garde, Jugendstil, German Expressionist artist. This is a rare full color example of the artist's work, most surviving pieces by Kley are pen & ink drawings. Kley, whose work first appeared in "Die Jugend" in 1908 caught the eye of Walt Disney in 1937 and Kley inspired much of the animation of "Fantasia". This evocative painting is rich in humor, technique and imagery. 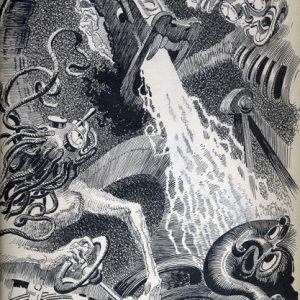 A technically dazzling pen & ink drawing by Heinrich Kley titled "Electrodämonen," translated "Electric Demons." A brooding and troubling satire on the machine age and ongoing industrialization. This captures Kley's technical brilliance and foreshadows the later science fiction pulp drawings of Virgil Finlay. Kley, whose work first appeared in Die Jugend in 1908 caught the eye of Walt Disney in 1937 and Kley inspired much of the animation of Fantasia. This drawing appears as a full page plate in The Drawings of Heinrich Kley.