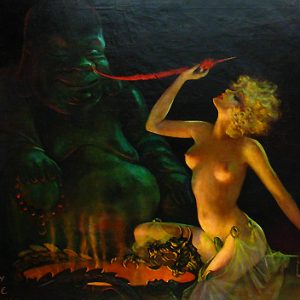 This exceptionally large oil on canvas mural by Henry Clive was created for the long gone legendary Hollywood Boulevard haunt “The Jade Lounge.” Titled “The Buddha-Pest,” the image acted as a logo for the bar, with matchbooks and post cards created with its likeness to attract tourists. The Jade Lounge became a destination and this monumental painting remained a focal point of the restaurant for decades. Henry Clive executed several murals for Hollywood nightclubs, and for The Masquers Club, Hollywood’s oldest theatrical club.