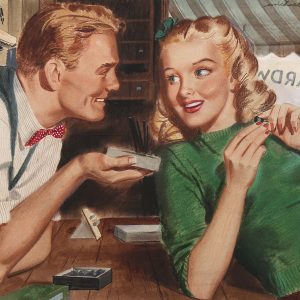 Two for Five – A Gouache Illustration by Michael Silver Up for sale is a wholesome and nostalgic gouache painting by American artist and illustrator Michael Silver. A classic mid-century, glossy magazine illustration, this winsome artwork features a handsome hardware store clerk with a chiseled jaw, blonde hair, and bright white teeth who is overjoyed […] Not So Simple – A Gouache Illustration by Dick Williams Up for sale is a beautifully rendered and emotionally wrought World War II-era gouache painting by artist and illustrator Dick Williams. In this published work of art, a young, blonde haired, blue-eyed, girl-next-door lies on her bed surrounded by letters from her beau who is […] 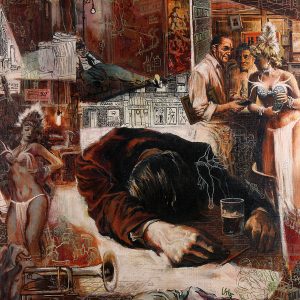 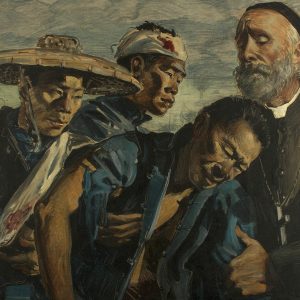 A skillfully executed interior illustration for a serialized story by Pearl S. Buck titled China Gold which ran in Collier’s Magazine from February 7-April 18, 1942. Caption reads: ” Father Valerian came out from the chapel at once and led the wounded men to the hospital “. A large crisply-rendered oil on canvas mounted on board. Martha Sawyers artwork is in the Frank Gehry-designed Frederick R. Weisman Art Museum in Minneapolis. 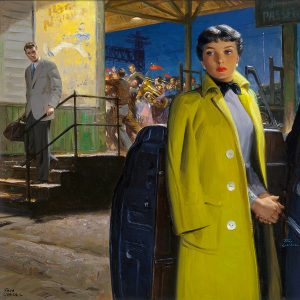 Tom Lovell created this colorful and expertly rendered painting to illustrate “Son of The Coach” an interior story for the October 14, 1950 issue of Collier’s Magazine. A copy of the magazine is included in the sale. The scene captures a brunette co-ed turning away in sadness from the ongoing marching band celebration in the background, as the son of […]

Son Of The Coach Elbert McGran Jackson created this fabulous golden age of illustration oil on canvas painting for use as a cover for the December 13, 1924 edition of Collier’s magazine. The image features a “smart set” styled young flapper girl beauty preparing for her radio performance by applying some bright red lipstick if only to prove that she does not […] 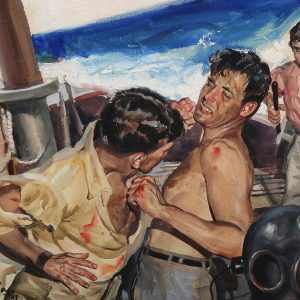 A large original watercolor illustration by the prolific important American illustrator C. C. Beall. A dramatic scene of unknown usage of a fight on deck a sailing ship on the high seas.

Battle on the High Seas 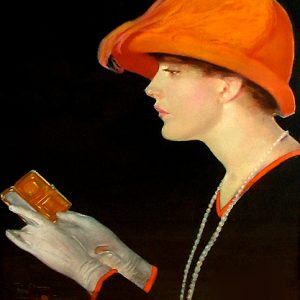 From the estate of legendary jazz-age Ziegfeld Follies photographer Alfred Cheney Johnston comes this sensational pastel by noted American illustrator Penrhyn Stanlaws. Inscribed “To Cheney from Penrhyn Stanlaws”, this is a fabulous offering it features a stylish 1920s flapper girl in a cloche hat admiring her abundant beauty in a compact mirror. This was created as the cover for the October 4, 1924 issue of Collier’s magazine, and later inscribed and gifted to Johnston. A large scale and evocative interior story illustration by Herbert Morton Stoops; likely commissioned for Collier’s or Cosmopolitan magazine, both of for which the artist was a frequent contributor. A briskly composed hearth scene with broad brush strokes that ultimately creates a wonderful sense of urgency and movement. Stoops painted in a style much like Dean Cornwell and Howard Pyle, the artist has a high water mark at auction of just under $11,000.00 in 2001.