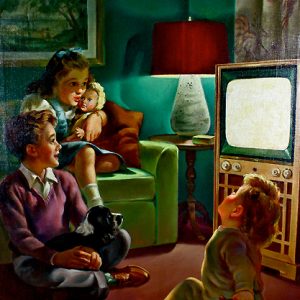 An endearing, albeit slightly sinister, interior hearth and home Americana scene titled "Magic Spell" by noted calendar and pin-up artist Vaughan Bass. In this late 1940s work, the newly invented television takes center stage in a room of otherwise unsupervised children of all ages. All participants are transformed by the magic spell cast by the glowing console. The unpainted television screen surface would act as advertising placement in the finished calendar where text would be added to appear as though it was on the T.V. 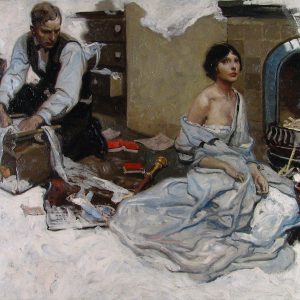 A large scale and evocative interior story illustration by Herbert Morton Stoops; likely commissioned for Collier's or Cosmopolitan magazine, both of for which the artist was a frequent contributor. A briskly composed hearth scene with broad brush strokes that ultimately creates a wonderful sense of urgency and movement. Stoops painted in a style much like Dean Cornwell and Howard Pyle, the artist has a high water mark at auction of just under $11,000.00 in 2001.