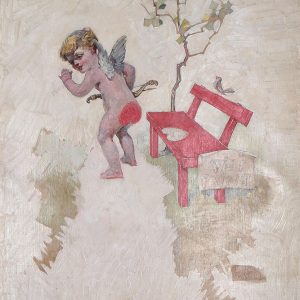 An impish winged cupid is the subject of this Edwardian Americana illustration by famed and prolific artist Orson Lowell. It appeared as the September 25, 1913 cover of Life Magazine's Heart To Heart Number. 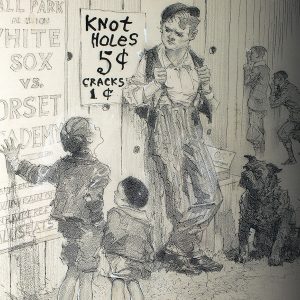 An early 1900's original illustration by Orson Lowell depicting a group of young boys taking in a baseball game knot-hole style. Major League Baseball of course still uses the term when larger ticket buys of youth groups are involved. I had never made a connection with the visual here, that the term stemmed from young boys peering through knot holes in the lumber used to build the outfield fences. A nostalgic Americana, baseball themed work by the gifted and prolific important golden age illustrator. Nicely matted and framed and ready to enjoy. 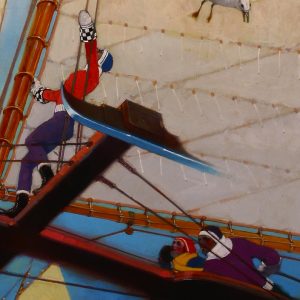 This Orson Lowell scene of a flapper couple ice yachting with the unexpected help of a pierrot deckhand was presumably created as a cover painting for Collier's magazine. 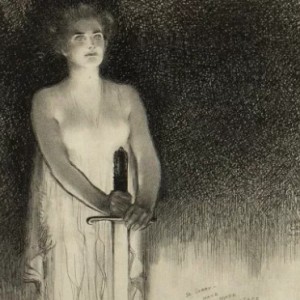 A sophisticated, topical Orson Lowell pen & ink drawing featuring a Japanese soldier bowing before a mythically inspired goddess of death (named by Lowell Mortise, a play on the latin word for death) with the caption So Sorry - have made mistake. The age of this piece, which dates to the first years of the 20th century, makes this by all accounts a commentary on the massive casualties ensued during the Russo-Japanese war of 1904-1905, a war Japan won, but at a human price much too high. A whimsically rendered, belle-epoque pen and ink illustration, presumably created for an early issue of Life magazine, addressing the adventures of growing old. A young girl on the left attempts to gain the attention of father time (viewed literally handing out birthdays off of an old cart) while Edwardian attired women on the right flee the aging process. This appears to be an illustration for a writing by Helen Ring Robinson, the author who in 1908 adaped a version of Uncle Tom's cabin for children. Her name is ghost written in light pencil upper left below one of the 8 draining hour glasses.