A large  c. 1936 signed pastel portrait by Zoe Mozert of the Hollywood film star Loretta Young from about the time of her starring turn in Ramona. Zoe Mozert was a much in demand Hollywood film magazine cover artist during the pre-code years of Hollywood tinsel town glamour. She later settled into a long and […] 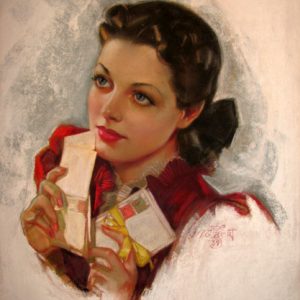