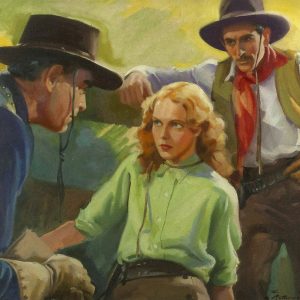 A wonderful original oil on canvas used as a poster design for the 1937 Warner Bros. Western film starring Dick Foran titled Prairie Thunder. Illustrated in this work are Albert J. Smith, Janet Shaw and Jim Corey. Ratterman was a gifted illustrator whose work appeared in many of the major “slick magazines” as advertisements and/or covers.