Grapefruit Moon Gallery is delighted to offer the original published cover pastel by the obscure female New York City Illustrator Tempest Inman used for the July 1922 cover of Photoplay Magazine. This captures to great affect the smoldering intensity and rugged good looks of the Latin lover film star Rudolph Valentino. This is easily the most famous movie magazine cover in Hollywood film history the image is reproduced as the cover of the hardcover book “Photoplay Treasury” that came out in 1972. This was owned by Ken Galente in New York City who operated The Silver Screen Gallery in the garment district for many years until his death. I had the pastel silk lined and framed in a 22 carat gold leaf frame and it displays wonderfully, the condition is excellent with strong vibrant colors and great clarity. 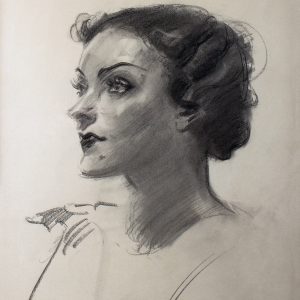 A sophisticated charcoal portrait by iconic and beloved American artist and illustrator James Montgomery Flagg, dated 1936. A severe yet fetching caricature-styled portait of Hollywood film legend Gloria Swanson during her self-imposed seven year hiatus from Hollywood. Flagg created a series of similar portraits for the cover of Photoplay Magazine during the years 1936 – 1938. This was likely commissioned by Photoplay for the series, but scrapped when a rumored return to film by Swanson failed to materialize. 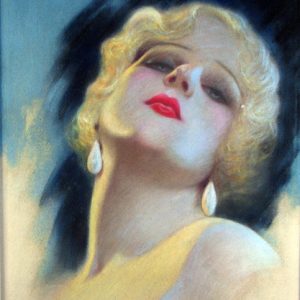 A fine and rare surviving original pastel by Charles Sheldon of the young and lovely Jean Harlow from her early years around the time of her breakthrough role in Howard Hughes’ epic film of 1930 Hells Angels.