Grapefruit Moon Gallery is delighted to offer “Out of the Darkness” by the well listed Brandywine School female artist Edith Ballinger Price. This ethereal view was painted in 1920 and exhibited in 1925 at the Pennsylvania Academy of the Arts annual. Image features a really inventive and inspired angelic mother enveloping her young children, one of whom is depicted as blind as was the artist’s young adopted daughter. Fans of the American Arts & Crafts movement have become attracted to the Brandywine school, as the aesthetic of the artwork complements Bungalow and Prairie School interiors.

Out of the Darkness 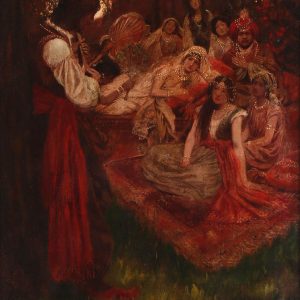 A deftly rendered, intricate, highly decorative oil on canvas painting by noted Brandywine School illustrator Arthur E. Becher, a student of Howard Pyle. An East Indian Minstrel performs magic feats to the delight of his adoring harem in this Orientalist Golden Age of Illustration depiction. Becher’s work appeared in numerous magazine titles after the turn of the last century; Scribner’s and Leslie’s most notably. He also created full color bookplates for such titles as “Long Live the King” and an 1914 adaptation of Edgar Allen Poe’s “The Raven” by P.F. Collier & Sons. A delightful oil on canvas by Eugenie Wireman likely used by the Curtis Publishing Company as a Christmas magazine cover circa 1910 – 1920. Wireman studied under Howard Pyle and worked as a Brandywine school illustrator creating children’s book illustrations, magazine covers, and advertising art for many Golden Age of Illustration magazines such as The Saturday Evening Post. A delightful view of a young child enjoying the spoils of a bountiful Christmas Morning, with great imagery and antique toy laden fanciful nostalgic appeal.