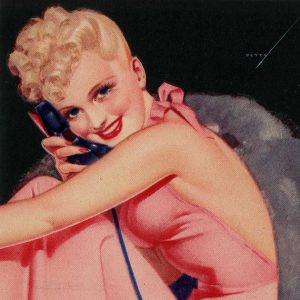 George Petty in the Illustrators Hall of Fame 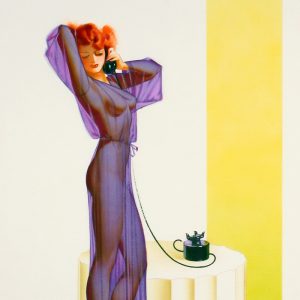 A deliriously fresh published Petty Girl mixed media pin-up illustration from 1937 that appeared in the pages of Esquire magazine with the quip “He doesn’t smoke and he doesn’t drink – I don’t know what I’ll do to amuse him”. A masterful rendering of a sexy modernist redhead who is clearly styled after Bette […] 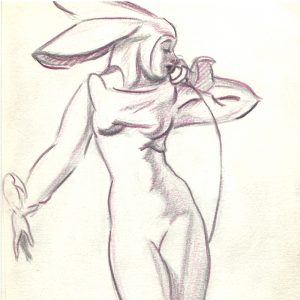 An original George Petty – Petty Girl small presentation pin-up drawing which was given to the Michigan area artist Robert Bushewicz a friend and colleague of Petty’s. In this well rendered colored graphite rendering, Petty choose to recreate one of his most iconic Petty Girls, this image first appeared in the pages of Esquire magazine […] 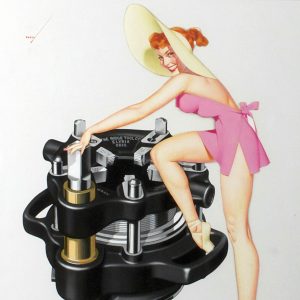 Seen gamely climbing into a larger than life pipe threader in ballet slippers and skimpy pink apron, this redheaded Petty girl is an unlikely yet alluring gearhead. A published mixed media pin-up illustration by George Petty which appeared as a calendar for Ridgid Tools in September of 1952, as part of his […] This 1937 dazzling and fresh (both in scene and technique) original mixed medium illustration painting by George Petty first appeared in Esquire Magazine as a full page color cartoon. It also was published as the first image of a spiral bound folio titled “Petty – A Portfolio from Esquire”. One of the crown jewels from the estate of Charles Martignette. The work is framed and matted behind glass and is a defining example of the lithe and modernist Art Deco Petty Girl.

No Particular Floor, Just Drive Up and Down 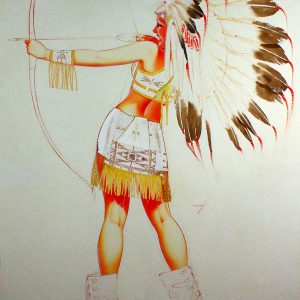 This original Old Gold Cigarettes commissioned advertising painting appeared in print in 1939 under the title “Wa-Ta-Hun-Ee!”. That year George Petty created a full years worth of Old Gold Petty girls for the ad agency Lennen & Mitchell, creating continued interest in the Old Gold Brand with the monthly appearance of his deliriously successful pin-up creations. In the scene, a sexy Indian Maiden takes aim with quiver and bow in what has surely become one of the more iconic works by this great artist and illustrator. 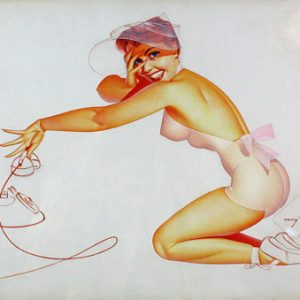 George Petty’s enormously successful career as an illustrator began in the mid-1920s painting magazine covers and images of beautiful girls for calendars. The creation that made him legendary debuted in the first issue of Esquire magazine in 1933. The “Petty Girl,” with her dreamy curves and witty banter, quickly became a popular symbol of the American male’s feminine ideal.Esquire produced two other calendars by Petty in 1955 and 1956. This painting appeared as the September Petty Girl in the 1956 Esquire calendar. Rendered in watercolor on board, nicely framed and ready to hang.