Earlier this year, the Society of Illustrators inducted American illustrator and pin-up artist George Petty into their Illustrator’s Hall of Fame.

Since 1958, the Society of Illustrators has elected to its Hall of Fame artists recognized for their distinguished achievement in the art of illustration. Artists are elected by former presidents of the Society and are chosen based on their body of work and the impact it has made on the field of illustration.

When the first issue of Esquire magazine hit the market in October 1933, Chicago-based illustrator George Petty rose from journeyman regional advertising artist to a national arbiter of female beauty. Though not yet 30 when Esquire made his name, Petty had been working steadily for 15 years. He began his career apprenticing in his father’s photo studio refining airbrush techniques to retouch negatives. His family business approach to work would carry through his entire career. After his father’s death in 1916, Petty supported his wife and two young children as a staff artist for a local advertising agency whose clients were Midwest brands like Marshall Fields department stores and Atlas beer. His early work offers hints of what would become his signature style—boneless tapered fingers, impossibly long legs, clothes that showcase what’s beneath them—but little suggested that he would go on to become one of the central figures in the creation of pin-up art as we know it today.

Though Petty’s long-lashed, lithe beauties emerged straight from the artist’s imagination, another Esquire artist came up with the gags that first framed these images, and foregrounded the sophistication and sexual availability of these creations. In the earliest examples, Petty Girls were shown tangling with a character often called the “old geezer,” who was at once emblem and foil for Esquire’s target audience. As a luxury-oriented magazine in Depression America, Esquire had to both glorify consumerist objects of desire and also give readers who couldn’t afford access to them an outlet to mock the millionaire class. Petty’s work offered just that. His full-page cartoons showed lithe gold-diggers in transparent satin evening gowns negotiating with balding Lotharios above double-entendre laden quips worthy of Mae West. It was never clear who was coming out ahead in these exchanges, but both sides knew what was being traded.

Within two years, Esquire readers grew tired of the codger. They wanted to imagine themselves in the picture with the object of their desire. The magazine replaced the “old duffer” cartoons with a near-monthly illustration by Petty of a lone female figure looking directly at the viewer against a stark white background, often while talking on the phone. She was a near-perfect symbol of her time. Her gown’s implausibly sheer fabric was an extreme exaggeration of new lightweight synthetics, and the phone suggested the independence technology provided. Petty’s airbrush technique gave the whole thing a plasticine quality. His play of fully formed bodies and faces against gesturally sketched extremities captured the focus on efficiency and speed of Fordism. They implied the question “who has time to finish anything these days?” Even Petty’s reuse of his Esquire pin-ups in advertising campaigns was regarded as evidence of American entrepreneurialism. The Petty Girl became an embodiment of the machine age, and her creator became a household name.

The late ‘30s were Petty’s apex. From 1936-1941, Petty was a celebrity judge at the Miss America pageant. Along with his illustrations, Esquire featured a long-form photo-essay on a hunting safari Petty took to Africa. He was hired to endorse a “Curvex” wristwatch, for who better to weigh in on curves than the man who made his name idealizing them. In 1939, students at Princeton University voted Petty their favorite artist. Rembrandt came in second. The old guard tsk-tsked, but Hollywood took notice. 1939 saw the start of negotiations for a film very loosely inspired by the artist’s life, which would be released in 1950 as The Petty Girl.

Unfortunately, as Petty’s popularity grew, so did tensions between the artist and Esquire. Advertising work paid substantially more than editorial, and everyone from Jantzen swimwear to Old Gold cigarettes wanted a Petty Girl. The artist worked himself to exhaustion trying to meet the demand, often missing magazine deadlines in the process. In the months leading up to their (first) formal split in 1941, Esquire used the letter pages of the magazine to express frustration and to roll out Petty’s successor, Alberto Vargas.

Though Vargas and Petty were set up as direct competitors, the entrance of America into WWII left enough room for both– and a host of imitators. The appetite for “morale-boosting” pin up seemed endless in wartime. Petty took advantage, licensing old works as stationary, address books, playing cards, and more. The patriotic appeal of pin up sanitized the genre and broadened its appeal. Petty’s singular vision of athletic leggy womanhood branded the new family friendly spectacle the Ice Capades. True magazine re-introduced the Petty Girl as a monthly feature catering to returning GI’s. Petty’s ubiquity wouldn’t last long. Within a few years, the Ice Capades and True associations ended in acrimony similar to his Esquire run.

Petty’s loyalties extended only as far as his immediate family, who had a major hand in his enterprises. His wife handled administrative aspects of his business and his favorite model was his daughter Marjorie. She began sitting for pin up illustrations when she was only 15. This choice sounds scandalous today, but at the time was taken as evidence that Petty’s endeavors were less, rather than more, lewd.

By the 1950s, the public began to see the Petty Girl as a little old-fashioned, looking to magazines like Playboy for their girlie picture ration. Yet, he produced some of his most innovative work in this deacde. His streamlined style hit its high water mark when he was commissioned to create a hood ornament for Nash automobiles, and his final major ongoing commission offers the purest expression of Petty’s particular vision. The Ridgid girl was an advertising calendar campaign of the Ridge Tool Company. Each month showed a different image of a smiling, underdressed pin-up girl frolicking on a larger than life depiction of one of their wares.

Throughout his career, Petty worked by beginning with a precisely sketched red line outline, which he would then surround with a transparent frisket layer to keep his curves precise and avoid the airbrush bleeding into the background. It was a short step to just cut out the figures and intertwine them with the renderings of the machines. The surreal nature of the assignment allowed Petty a whimsical solution to one of his most long-term dissatisfactions with his work. A consummate leg-man, Petty expressed ongoing frustration with how all shoes, even the highest stiletto, broke the line of the calf and made legs appear shorter. With the Ridgid calendars, he solved the problem by putting his plucky, heavy machinery-operating pin up cuties in ballet point shoes. The juxtaposition of the smiling, scantily clad woman climbing, caressing, and even straddling these larger than life tools proves almost fetishistic. It’s also delightful, and stands out as some of Petty’s best and most collectible work. Even though he didn’t incorporate the toe shoe into his illustrations until near the end of his career, girls costumed as everything from farmhands to fencers inexplicably en pointe is one of the first things that comes to mind when defining Petty’s style. 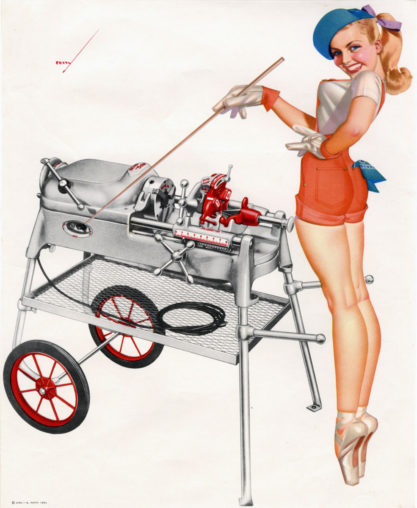 In the 1960s, Petty entered semi-retirement.  He emerged for the occasional one-off illustration, including a final piece in 1973 celebrating Esquire’s 40th anniversary. It playfully shows the Petty Girl with grey hair and reading glasses, her gravity-defying bosom and coltish legs as youthful as ever. It is a fitting coda to a partnership that defined 20th century pin up.

George Petty died two years later, in Southern California, where he lived with his daughter Marjorie and her family. He was 81.

George Petty in the Illustrators Hall of Fame