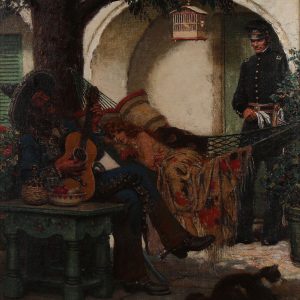 Created to accompany the 13th installment of the serialized novel" Silver Knees" in the April 4th 1931 issue of Liberty Magazine, this oil on canvas painting features a romanticized depiction of love during the Mexican-American war. In this lush scene, Gitana, a gypsy dancer, enjoys an afternoon serenade as her star crossed lover, an American war hero, looks on quietly. 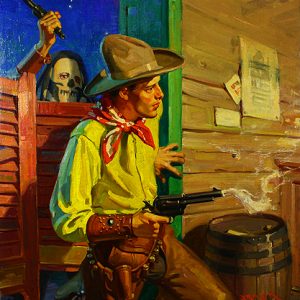 Grapefruit Moon Gallery is pleased to offer a rare surviving Jerome Rozen pulp cover painting from an as of yet undetermined Street & Smith 1930s publication. This macabre and defining oil on canvas shows an old west tavern with a handsome, smoking-gun-holding cowboy menaced by a hooded villain in Day of the Dead Calaca mask. This masterful dark western themed artwork is tense with imminent danger. Signed lower right; painting has been relined and is ready to frame and enjoy.

The Day of the Dead 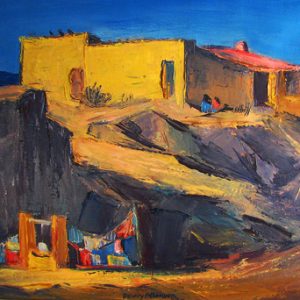 An unusual mid-century modern impressionist oil on canvas dated 1954 by well listed Minnesota painter and WPA muralist Dewey Albinson. A colorful view of a colorful space in the town Cocula, Jalisco, Mexico (where the artist lived for a time) titled The Yellow House. Painted in a dramatic and well realized impasto technique with wildly executed colors and a strong sense of composition and harmony. In original painted wide profile WPA aesthetic rough wood frame with exhibition tag on verso pine stretchers. 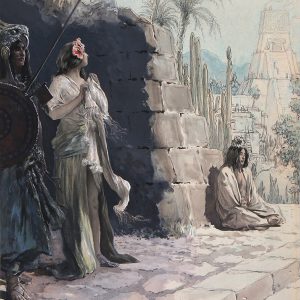 A large and fabulous original illustration painting by Eric Pape used in "The Fair God" by Lew Wallace as a bookplate (page 462, with the caption "She gave him the signal").

Pape is best remembered as a prolific illustrator of children's books and historical fantasies, as well as an artistic contributor to Scribner's, Cosmopolitan, and Century Magazine. After opening his own illustration school in 1898, he taught N.C. Wyeth, whose style is influenced by Pape's own.