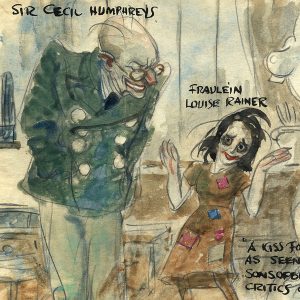 James Montgomery Flagg’s watercolor sketches were an endless source of amusement and cheer to his friends and colleagues.  Here, the artist works to cheer up his friend Cecil Humpheys after the poor reviews of the 1942 revival of J.M. Barrie’s play A Kiss for Cinderella in which he starred alongside Louise Rainer. Flagg depicts laughably […]