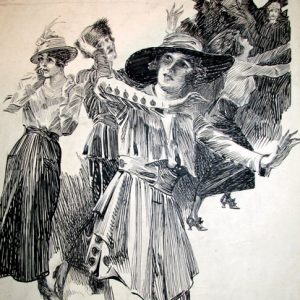 A whimsically rendered, belle-epoque pen and ink illustration, presumably created for an early issue of Life magazine, addressing the adventures of growing old. A young girl on the left attempts to gain the attention of father time (viewed literally handing out birthdays off of an old cart) while Edwardian attired women on the right flee the aging process. This appears to be an illustration for a writing by Helen Ring Robinson, the author who in 1908 adaped a version of Uncle Tom’s cabin for children. Her name is ghost written in light pencil upper left below one of the 8 draining hour glasses.