Shortly after the Armistice of 1918 brought an end to World War I, an outbreak of violence within San Francisco’s Chinatown attracted national attention, and raised awareness of the off-and-on gangland violence known as the Tong wars. As San Francisco became known as home to the largest Chinese population anywhere outside of Asia, fascination about […] 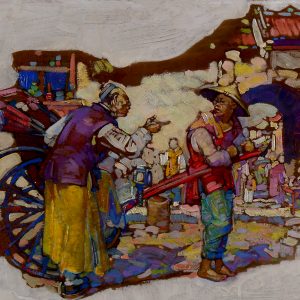 This original 1920s oil on board by Henry Soulen was likely an interior spot illustration which appeared in the Saturday Evening Post. The colorful, boldly painted, Orientalist scene shows a rickshaw and two figures in heated conversation in front of gates of what appears to be San Francisco’s Chinatown. Housed in a simple, original-to-the-painting wood […] 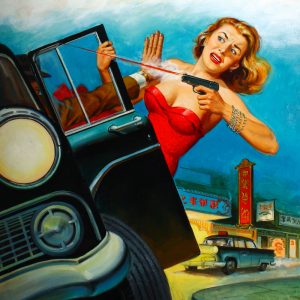 It doesn’t get more action packed than this high drama scene of a gangster mol pin-up girl in a shoot out with an unseen mobster trying to push her out of a moving car in a seedy urban Chinatown. An original oil on board artwork by Wil Hulsey, this appeared as the cover of a 1956 issue of Guilty […]

Make Me A Widow