Original Illustration from Good as Gold by Steven Stroud This is a mixed media, watercolor and pen & ink on artist's paper illustration by Steven Stroud. A sketchily composed illustration, it shows a chaotic group gathered at a table. Some of the members of the meeting appear exasperated while others behave oddly such as removing […] Original Illustration from Good as Gold by Steven Stroud This mixed media watercolor, pen & ink on artist's paper illustration by Steven Stroud is sketchily done to show a man in a wheelchair careening down a hallway as a man and woman look on. It has been signed by the artist in the bottom of […]

Original watercolor illustration published as the frontispiece for N. Scott Momaday's novel "The House Made of Dawn" (1977, The Franklin Library).

American painter and illustrator Bart Forbes (b. 1939) was specially commissioned to create a series of interior illustrations for The Franklin Library's 1977 publication of the novel House Made of Dawn by N. Scott Momaday. 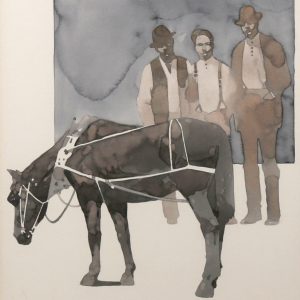 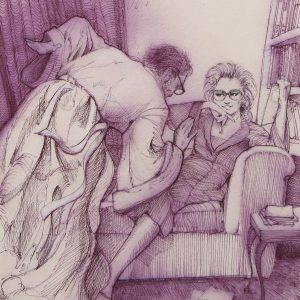 This mixed media watercolor, pen & ink on artist's paper shows a woman relaxing on a couch with a book in hand. Her reading has been interrupted by an individual who leans over close into her body, gesticulating wildly with his hands. This illustration appears as a full page bookplate on page 159 of Good […] This pen & ink on artist's paper shows a man in a t-shirt and running shorts jogging around an indoor second-level running track. He appears strained and breathless - clearly not enjoying the exertion. This illustration appears as a full page bookplate on page 67 of Good as Gold by Joseph Heller. It depicts a […]

Every Change Is for the Worse - "Good as Gold" Interior Illustration