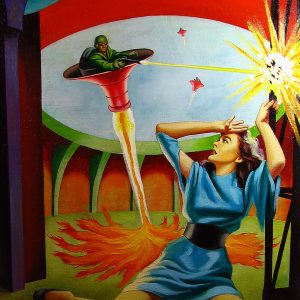 An alternate cover for the October 1957 Issue of Imagination Science Fiction, by Lloyd Rognan, illustrating the interior story “You Can’t Buy Eternity” by Dwight V. Swain. This oil on canvas board original illustration differs from the published cover (which was also painted by Rognan) in several respects, notable the blond in peril on the published cover is envisioned in this rendering as a brunette. Which lends credence to the belief that a pulp cover artists life was not easy and was often subject to publishers whims and guidance. A published complete copy of the magazine is included in the sale. 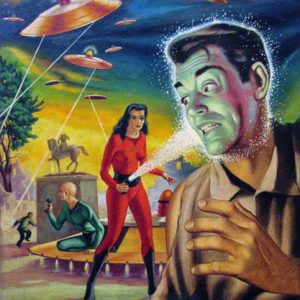 A genre defining original illustration painting for the October 1956 edition of Imagination Science Fiction for the interior story by Edmond Hamilton titled Citadel Of The Star Lords. By Lloyd Rognan (1923-2005) an Original oil on illustration board depicting ufo’s , rayguns, mayhem and all things lurid sci-fi, set amongst the ruins of a town center square anytown USA circa 1950’s. The artist recently passed away and many works were recently auctioned off directly from his estate. This to my eyes was one of the defining work by this highly regarded and frequently published illustrator.

Citadel Of The Star Lords