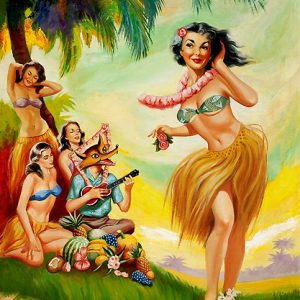 This large scale, colorful cheesecake pin up painting features a Hawaiian hula girl serenaded by Rogue Magazine’s signature wolf and was created as cover art by Lloyd Rognan for an unidentified issue of the infamous early men’s magazine. Beginning with the first issue of Rogue, Rognan developed a series of these cartoonish little red riding hood inspired entanglements, and this example is particularly appealing. A classic example of mid-century hula girl Hawaiiana in which the magazine’s signature “Rogue Wolf” plays the part of the haole (or in this case howly?) in tourist shirt.