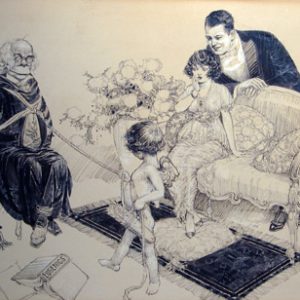 A topical newspaper illustration (presumably for the Hearst Newspapers) confronting the dilemma of Eugenics. In the 1910’s-1920’s the United States was faced with the question of whether individuals should marry with a mind towards creating superior babies through genetic family planning. This cartoon finds this notion farfetched and we see love conquering science to the shock and delight of a couple now free to live as their hearts command. A very sophisticated topical take on a pre-eminent question of the early 20th century. This is a fantastically rendered en grisaille style pen and ink drawing with highlights. En grisaille was a popular style in the early 20th century for illustrations created for reprinting. In a stylish contemporary fine gilded wood frame.