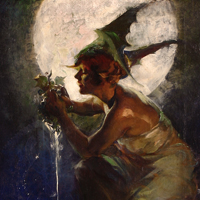 The Light of New York by Walter Dean Goldbeck was created as a full page color advertisement that ran in The Saturday Evening Post for General Electric. The inspired and almost transcendentally captivating image would later become a Judge Magazine cover (August 1, 1914) under the title “The Spirit of New York”. The image, which features a mischievous goddess sprinkling moonlight down onto the city below also captured the imagination of music publishers Fred Fischer, who used it as a sheet music cover for his composition “I Found a Rose in the Devil’s Garden.”

The Light of New York