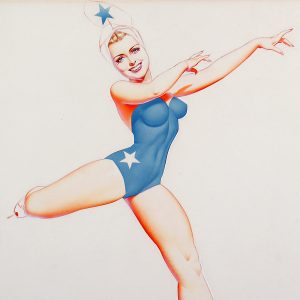 This 1942 patriotic Petty Girl was the first of George Petty’s iconic pin up illustrations commissioned by the Ice-Capades, then in its second season and soon to become a cultural institution. Developed by RKO as a theatrical extravaganza on ice and held at Rockefeller Center in New York City, the event was wildly popular and the souvenir programs became a […] 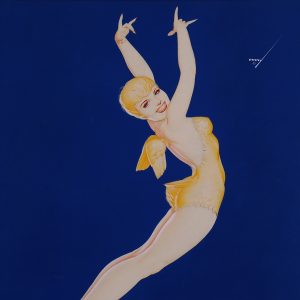 George Petty created this dynamic original pin-up painting as cover art for the souvenir program for the 1946 Ice-Capades (the sixth year of its production which took place in New York City at Rockefeller Center). The image shows a modernist winged pin-up girl deftly soaring through the air on figure skates against a blue background. This particular […]