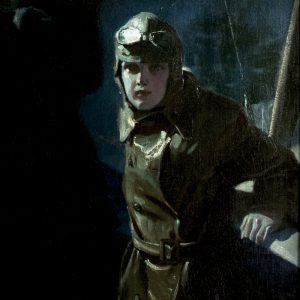 Stockton Mulford created this compelling oil on canvas illustration of a daring aviatrix for the April, 1924 issue of Everybody’s Magazine. The art accompanied the interior story The Long Call, a Canadian Northwest rescue adventure story by Kathrene and Robert Pinkerton that centered on a fictional embodiment of the early 20th century independent woman.  The story of Peggy Thorpe, who at […]