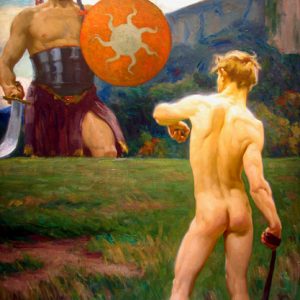 A large and bold, early 20th century patriotic German David and Goliath scene, by one of the defining “official” painters of the German empire and later, the Third Reich. This classically styled, expertly rendered scene features a highly eroticized nude David standing strong against the imposing Goliath force. This deeply allegorical mythical painting pronounces the vitality and virility of the German nation, a theme which dominated Nationalist German art throughout the late 19th and early 20th century, even as more abstract movements like German Sucessionism and the Jugendstihl gained prominence internationally.