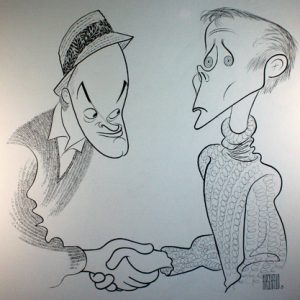 A brilliantly rendered pen & ink illustration by the legendary New York City illustrator Al Hirschfeld. In this tightly rendered “two worlds collide” image in which by the Russian populist poet Yevgeny Yevtushenko embraced by America as represented by cultural icon Bob Hope. The scene offers a lighter look at the Cold War tensions that occurred as politically active Soviet poets gained prominence in the US.