Welcome to Grapefruit Moon Gallery. Here you will find an archived visual history of past sales. Pretty to look at, some are quite old; but when they're in here, consider them sold! 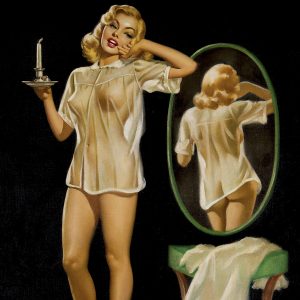 Sleeping Beauty Pin-Up Girl by Edward D'Ancona This is a recently rediscovered, rare, surviving pin-up calendar painting by the prolific illustrator Edward D'Ancona. It was published with the title "Behind in Her Sleep" by The Louis F. Dow Calendar Company of St. Paul, MN. Grapefruit Moon Gallery unearthed a collection of new-to-the-market pin-up paintings that […]

Behind On Her Sleep

What a Break - Overpaint

A Metropolitan Beauty by Haskell Coffin On offer is a lovely masterfully rendered pastel by the prolific American artist and illustrator Haskel Coffin. The image shows demure sad eyed flapper girl in a floating head styled popularized by Rolf Armstrong. Pastel was created as the cover for the May, 1920 edition of Metropolitan Magazine. Pastel […]

A fun whimsical expertly rendered baseball themed illustration oil on canvas painting by E.M. Jackson. In this fresh to the market work, a baseball umpire is pelted with a tomato after making the "You're out..." sign. Our gallery loves this illustrator, this is from the 1920s or early 1930s and was likely a magazine cover […]

Flapper Girl with Fan by Charles Allan Gilbert On offer is a lovely pastel illustration by C. Allan Gilbert. It depicts a stylish flapper girl in a pretty beaded black dress with a large ostrich plume hand fan. It is our hunch that was created for the calendar market. It is signed in the upper […] 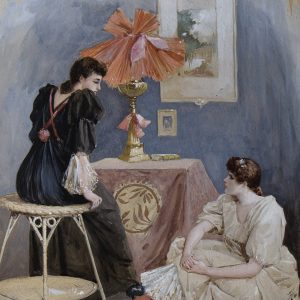 Victorian Cover Art by Archie Gunn This is a large format and racy (for the times) Victorian cover illustration for the long-running weekly periodical Truth Magazine. Created by illustrator Archie Gunn, this appeared as the cover for the January 13, 1894 edition with a title of "How Those Girls Love One Another". Two girlfriends are […] 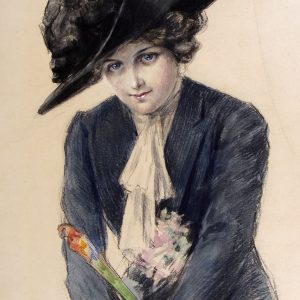 New Idea Cover Girl This is a large, well conceived, and beautifully detailed watercolor on artist's paper by illustrator Z.P. Nikolaki. It appeared as the cover for the April 1910 issue of New Idea Woman's Magazine. In this portrait a pretty, young Edwardian maiden in a wide brimmed garden hat prepares for her daily stroll with […] 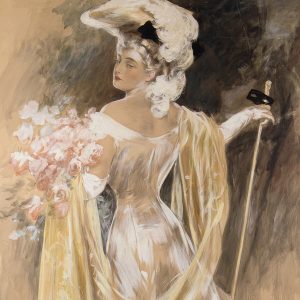 An Edwardian Calendar Girl This is a large format, published watercolor and gouache painting on illustration board by the prolific American illustrator Henry Hutt. This painting appeared as the January 1907 page of "The Henry Hutt Calendar". In this portrait a cinched waist Edwardian beauty delights the eye with a cane and masquerade mask held […]

Neysa McMein advertisement for Wallace Silver This stunning and expertly rendered pastel by Jazz Age illustrator Neysa McMein appeared as advertising for the R. Wallace & Sons Mfg. Co.'s line of silver plate.  Connecting the elegance of McMein's flapper beauty to the idealized "perfect hostess", this provides a wonderful window into what was considered "the […]

Under the Mistletoe - A Christmas Cover Girl