A kinetic, large format industrial-themed modernist painting by Erle Loran, titled Light Operator. This is signed and dated in the lower right corner, and additionally signed, dated and titled on the verso with an Oakland, California exhibit label from a 1969 Institute of Creative Arts traveling exhibition arranged through The University of California. An exhibition catalogue is included in sale, with the painting shown as a full page color plate. A commanding remarkable example housed in the original wood strip frame. 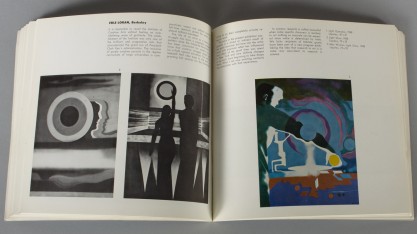 Erle Loran (1905-1999) Erle Loran was born in 1905 in Minneapolis, Minnesota on October 3, 1905. After graduating from the University of Minnesota, Loran studied at the Minneapolis School of Art under direction of Cameron Booth. His talent was recognized early when in 1926, he won the Paris Prize, which provided him the benefit of a traveling scholarship to Europe where he lived in the studio of Paul Cézanne. This exposure provided much influence to Loran’s life, where he saw the works of Picasso and other European modernists.

But, it was Cézanne’s work that motivated him. His fascination with Cézanne led him on a three-year odyssey through Cézanne country where Loran painted and photographed the countryside around Aix en Provence. It would be this experience that formed the foundation for Loran’s 1943 book, “Cezannes’ Composition”. After returning from Europe, he exhibited extensively. In 1936, he moved to California where be began his long teaching career in the art department of the University of California, Berkeley. It would also be during this period that Loran would associate himself with modernist Hans Hoffman. Loran served as the department’s chair in the early 1950s, and was awarded a University Citation upon retirement in 1973.

His early paintings include lyrical abstractions in primary colors; however, his style has constantly changed with the times. Watercolor was Loran’s medium of choice because it dried fast and was lighter to transport to his often-remote plein air locations, such as the ghost towns of California and Nevada. His landscapes, often to include a building or structure, were clean, fresh, and spontaneous.

In the 1940s, as the war in the Pacific intensified along with domestic tensions, Loran’s work transitioned from plein-air painting to studio work. During this period, landscape painters were occasionally seen as suspicious figures and sometimes mistaken for spies. Loran had such an experience when an armed soldier detained him. Shortly thereafter he decided to focus his painting on abstraction.

In the late 1960s, his work became a fusing of Op, Pop, and Hard Edge. From this he moved to figurative painting and later to geometric designs and symbols.

In 1960, while in New York City, Loran had further study with Hans Hoffmann who brought European modernist philosophy and techniques to the United States.

Among Loran’s many exhibitions were in 1924 at the Minnesota State Fair; the Museum of Modern Art in New York City, 1933; the Rockefeller Center, 1935; Oakland Art Gallery, 1936-1946; the San Francisco Art Museum annuals from 1936; the Golden Gate International Exposition of 1939; California Palace of the Legion of Honor, 1945; California Watercolor Society, 1947, among many others. His works can be seen at the San Francisco Museum of Modern Art, the Denver Museum, the University of Minnesota, the Santa Barbara Museum, and the International Business Machines (IBM) Corporation.

Afflicted with a visual impairment, Erle Loran continued to paint until about a year before his death. He died in Berkeley, California on May 13, 1999 at the age of 93.