Grapefruit Moon Gallery is thrilled to announce the acquisition of the extensive, detailed, and comprehensive estate of photographer and pin-up model Bunny Yeager. Described as “the world’s greatest pin-up photographer” by Diane Arbus, and best-remembered for her iconic collaborations with Bettie Page, Yeager’s body of work includes over five decades of spectacular, and groundbreaking celebrations of female beauty. 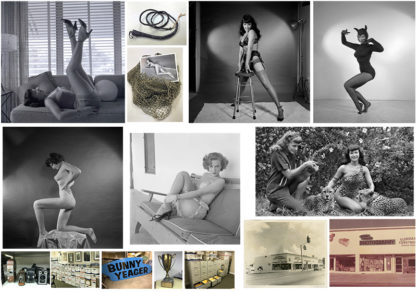 Yeager’s archive includes thousands of never-before-seen and many unpublished camera images of leading glamour and cheesecake models, unique camera negatives & transparencies, photographs, contact sheets, original model costumes, props, cameras, model release forms, technical notes, as well as displays and exhibition mounted large photographs from her Miami showroom. Yeager’s work is both groundbreaking and technically brilliant; one of the only female photographers working in the pin-up and nude genres, she captured the female body with a beauty, strength, power, and emotionality unparalleled by the leering lens of many of her male contemporaries.

We are offering many of these one-of-a-kind items on our eBay store.

From Queen of Miami to The World’s Greatest Pinup Photographer: The Biography of Bunny Yeager

In the late 1940s, a teenager named Linnea Eleanor Yeager rechristened herself Bunny, after a character played by the femme fatale Lana Turner. The choice was one of the first indications Yeager had her pulse on what was considered the height of female glamour, and her decades long career as a model and pin up photographer would see her join Turner as one of those who defined American female beauty in the 20th century.

Statuesque and with a beaming smile, Yeager began entering beauty contests shortly after moving to Florida at 17. She enrolled in modeling school, and signed to Coronet Modeling Agency upon receiving positive attention during her six-week training. She won many of the pageants she entered, and was crowned Miss Trailer Coach, Sports Queen, and–most fittingly–Queen of Miami. The colorful titles suited her, and her early modeling work shows her vivacious personality and ideal 1950s curves.

Not visible in the images though, was Yeager’s relentless drive and creativity. Rather than paying photographers for the many prints she needed to get her name in front of scouts to book jobs, she decided to take darkroom photography to develop her own pictures, and began learning how to use a camera.

On assignment for this class, she took the Marilyn Monroe look-a-like Maria Stinger to a local wildlife park (where she would later return to shoot one of the most enduring pin up images of Bettie Page, flanked by cheetahs), and ended up selling the work for use as the March 1954 cover of the girlie magazine Eye.

It was clear Bunny Yeager had found her path.

1954 would prove to be a transformative year for Yeager and pin-up photography as an art form. The first photos Yeager took of Page showed the model nude in Yeager’s family home beneath a Christmas tree in Santa cap. The shoot established a working relationship between the pair that defined both women’s careers, and raised their profiles significantly.

Yeager sent the photos to Hugh Hefner, who offered her $100.00 for the image. “Nobody had heard of Hugh Hefner” she told an interviewer. “But I figured because they were new they might pay attention to an amateur, and that’s what happened…If I hadn’t have made that early connection when he was just starting out, maybe I wouldn’t have got such a big push, but immediately I became employable.”

The first issue of Playboy hit the stands in December 1953, and it the bar for artistry and naturalism in nude photography magazines. Yeager and Hefner would go on to work together off and on for much of her career.

Her association with Playboy opened doors for Yeager and she became a celebrity and curiosity during the 1950s. US Camera dubbed her “The World’s Prettiest Photographer” and she appeared as a guest on shows like “What’s My Line” and “The Tonight Show.”

Not only was she a female pin-up photographer, by the end of the 1950s she was a mother of two, married to Arthur “Bud” Irwin who she met at “The Tip Toppers Club: a social gathering for the vertically blessed.”

She was also starting to be recognized for her incredible mastery of technique. Yeager’s command of fill flash technique, her pioneering use of the outdoor settings that abounded in Miami, and the innovative techniques she developed to create her many self-portraits all reverberated through the world of glamour and fine art photography, and her influence can be seen in the work of luminaries like Cindy Sherman and Yasumasa Morimura.

Famously, Diane Arbus once called Yeager “the world’s greatest pinup photographer,” and the more than 30 books published about her work testify to that assessment.

Yeager became influential through her commitment to her artistry and to detail. “I always looked at my work as an art form and not a job,” Yeager once said, and she seemingly was never satisfied unless she was pushing up against the boundaries of what was considered possible for her as a woman, a working mother, and an artist.

She designed and sewed many of the outfits worn by her models, tried her hand at acting and filmmaking, and remained a relevant and talented photographer throughout her over 50 year career.

Though when she first picked up a camera in the early 1950s, cheesecake photography was considered taboo and prurient, she lived to see her work shown in fine art galleries worldwide.

The first major museum exhibition of Yeager’s work was held in 2010 at the Andy Warhol Museumin Pittsburgh, Pennsylvania.

Bunny Yeager died in 2014 but her popularity only continues to grow.

Currently, two documentaries about Yeager are slated for release in 2019 and a scripted TV-show based on her life is in the works.

We are offering many of the one-of-a-kind items from Bunny Yeager’s estage on this site, on Etsy, and at our eBay store.

The Estate of Bunny Yeager