An important and technically masterful large format cover oil painting by James Avati, for the 1950 Signet books release of Love Knows No Barriers written by Will Thomas. The paperback was a revised and re-released version of God is For White Folks, his 1947 literary novel originally published by Creative Age press. Though the original release went largely unnoticed, the Signet revised edition saw widespread success. Marketed as part of a wave of socially progressive “negro literature” the novel explored questions of interracial relationships, passing and racial identity on a decaying Louisiana plantation. Pictured in the cover painting by Avati are Beau Beauchamp and Elisse Leseur, the two mixed-race protagonists whose relationship is at the heart of the story. Shortly after the release of the Signet paperback, Thomas penned an autobiography The Seeking, which explored some of the autobiographical elements of his work. A one-time prize fighter of mixed parentage, Thomas was deeply embittered by racism in America, and his vocal anger seems to have gotten in the way of his building on his initial success. In the early 1950s, the author moved his family to Vermont where he supported himself raising chickens and writing pulp fiction for magazines like True Romance and Argosy. Largely forgotten today, Thomas’s work and life both captured a lot of the tensions of post-World War II American integration efforts, and the humane and haunting illustration by Avati for Love Knows No Barriers powerfully brings this moment to life. 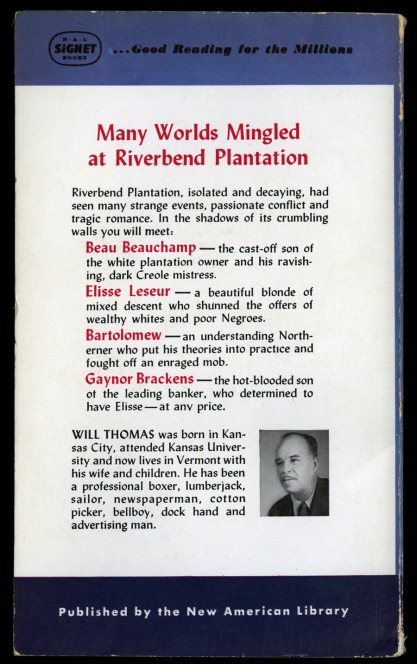