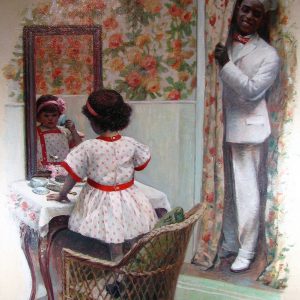 An original illustration treasure from the storied Cream of Wheat vaults, this oil-on-canvas by William V. Cahill was used for the 1913 advertisement titled Breakfast’s Ready Li’l Missy. This is perhaps the finest of the 18 works created by this Howard Pyle student for Cream of Wheat. An interior genre scene (in the same interior) painted in 1912 by Cahill titled “The Dress Fitting” set records in a New York City Sotheby’s Arcade Auction selling for a staggering $327,200.