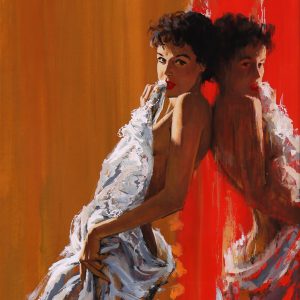 A captivating, lustful, original cover painting by Victor Kalin created for use as cover art for the 1959 Dell paperback edition of the Scott Jordan mystery Murder on Broadway by Hal Masur. The work was titled The Last Gamble in its hardback incarnation, but the paperback title captures the lurid allure of the mystery of […]