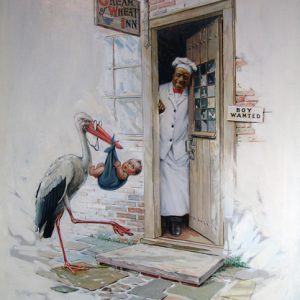 This large, original, oil on canvas by Edward Vincent Brewer is part of the storied Cream of Wheat "Rastus" advertising campaign. A stork responds to the chef's "boy wanted" shingle with a newborn baby. This image appeared on the inside cover of thousands of American slick magazines during the golden age of Illustration and is a timeless piece of Americana from the archives of the Cream of Wheat advertising vaults. "Here You Are" has never been publicly offered for sale before.