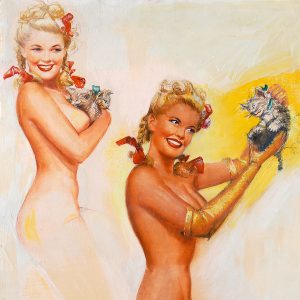 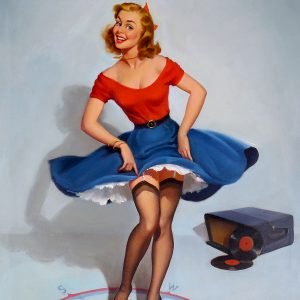 This fabulous original large format pin-up painting by Harry Ekman appeared as a Shaw Barton calendar in 1962, with the title “I Don’t Go Too Far In Any Direction!” Our patriotically dressed curvy co-ed appears to be indulging in that summer’s latest dance craze, swiveling her hips to the year’s biggest musical hits which included “The […]

I Don’t Go Too Far In Any Direction! 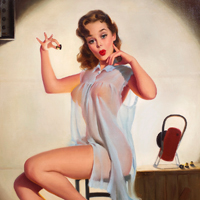 An unabashedly pure cheesecake situational pin up painting by Harry Ekman likely for The Shaw-Barton Calendar Company of Coshocton, Ohio. In this summertime sizzling scene, a pin up dream–clad only in the skimpiest negligee–finds herself at the fuse-box. The combination of the model’s attempt to keep cool with only a fan and her revealing see […] 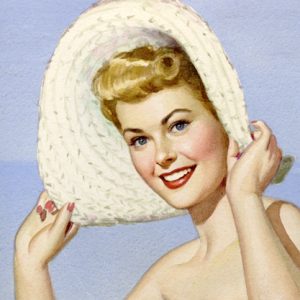 This delicately rendered original signed Pearl Frush watercolor pin-up illustration titled “Miss Gulf Coast”, was created for the 1947 Aqua Tour Series of bathing beauty images for the Shaw-Barton Calendar Company of Coshocton, Ohio. Pearl Frush was a prolific and talented female artist that was active during the 1940s and 50s and worked primarily out of Chicago. Painting is silk-matted and framed behind glass in a gorgeous wide profile museum quality gallery frame, signed lower right and verso is notated with usage publication text. 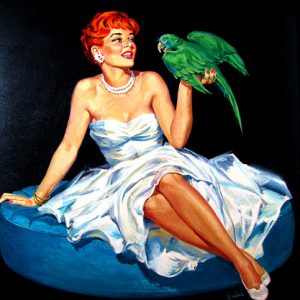 A 1961 painting by Al Brule created on commission for the Shaw-Barton Calendar Company; scene features a modern formally attired heartbreaker with her colorful parrot as was often the scene. Included in sale is a vintage calendar print of this work, titled “A Word With Polly”.

Brule was a Chicago area illustrator whose style closely resembled Haddon Sundblom and his circle of Chicago artists.

A Word With Polly 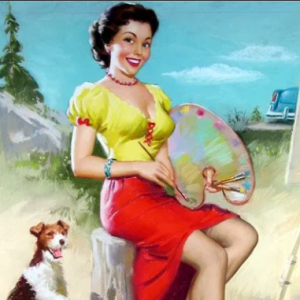 A large mid-1950’s calendar girl pin-up pastel that was commissioned by the Shaw-Barton Calendar Company for one of their wildly successful and genre changing “Sketchbook” style 12 page pin-up calendars. Knute “K.O.” Munson executed many pastels for the Brown & Bigelow Calendar Company during the 1940’s and then Shaw-Barton. He later went on to become a successful cheesecake pin-up photographer during illustration arts lean years of the 1960’s, a charmed life to be sure.

The Model as Artist