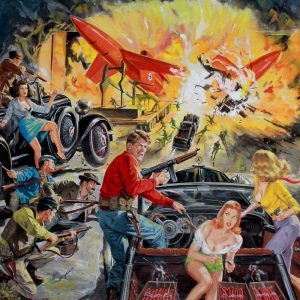 An explosive, apocalyptic WWII battle scene rages in this lurid large format illustration painting by Bruce Minney which appeared as the cover for the October 1963 edition of For Men Only magazine. With its strong jawed GIs and busty damsels with dynamite, the cover slug line of "playgirls turned killers..." sexploitive narrative is on full display, […] 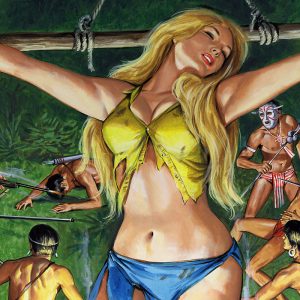 With a human sacrifice as the central conflict, a high octane tribal fight scene, and lurid bondage damsel in distress subject matter, this Bruce Minney artwork--which appeared as the cover for the June 1970 edition of New Man Magazine--captures all of the subversive allure of the Men's magazine genre. Loosely illustrating the interior story, "Smash the Latins' Jungle Combine […]