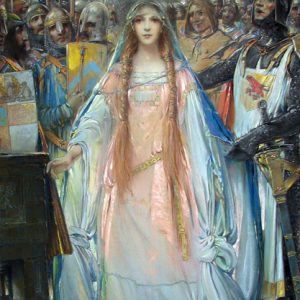 This is an absolutely exquisite pastel in the pre-Raphaelite style which depicts a climactic scene from "The Geste of Duke Joceyln." Originally used as the frontispiece for the light verse novel by popular English author Jeffrey Farnol, the scene features the fetching Duchess Yolande being presented at court after winning the heart of Duke Jocelyn. This is a shining example of Eric Pape's whimsical yet classic style of illustrating, and features remarkable use of color and detailing. Pape was a well-regarded and often-exhibited artist from the turn of the 20th century until his death in 1938. His original art is highly coveted and recently his pastel work has fetched $45,000.00 at Christies. This epic pastel is one of the nicest examples of Pape's work I have come across.