An original gouache on board created for the May 1962 edition of Male Magazine, illustrating "The Daring GI Raider Who Saved Our New Guinea Stronghold". A large, finely rendered scene depicting a gun battle, with requisite yet inexplicable scantily attired native babes, as per the norm of the bizarre and lowbrow world of "The Sweats." 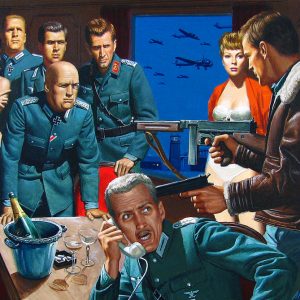 This dramatic and deftly rendered gouache was created as the cover for "Male" February 1966 "Yank Imposter In The Luftwaffe," and reprinted as an interior 2 page spread in the June 1967 issue of "For Men Only" titled "10 Days To Bring In The Death Head General." A remarkably tight work that shows Kunstler at his best, using an almost photo-realist technique to create tension, menace and fear.

Yank Imposter in the Luftwaffe 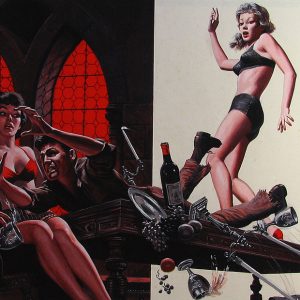 An alarmingly disturbing and well rendered original gouache illustration by the highly regarded and prolific illustrator Mort Kunstler, this interior 2-page spread appeared in the August 1961 edition of Male Magazine, illustrating Martin Fass's Million-Dollar Manhunt For A Cold War Nymph. The lurid, defining action-filled image captures the prevailing nihilism associated with the 1960's "sweat magazine" art and envelope-pushing adventure fiction. Text reads "She was the top female agent of BACO-Europe's anti-fascist Assassin's League, and when she fell into enemy hands, the Yanks had two weeks to find her-or it was war in the Middle East." 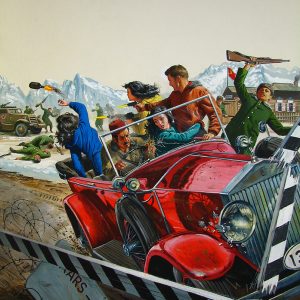 This original gouache noir illustration by well listed and prolific illustrator Mort Kunstler was used as the January 1968 edition of Male, illustrating Mario Cleri's "Blonde Bandit in Black Lace." An explosive sex kitten car chase that captures the prevailing nihilism associated with the 1960's "sweat magazine" art and envelope-pushing adventure fiction, this is a tense and hyper-realistic pop-art time capsule. 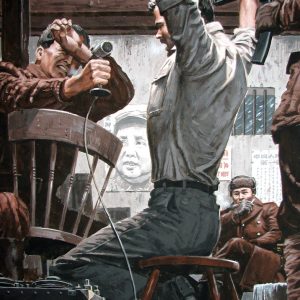 Gil Cohen created this expertly rendered, noir, hard boiled interior story illustration for the April 1963 edition of Male Magazine. The story this brings to life is titled The Combat Hero Who Survived Korea's Worst Brainwashing. This typifies the lurid, envelope pushing work which earned Mens genre magazines the apt title The Post-War Pulps. Caption reads ... "confess to your germ warfare crime", they told him or die like an animal..." Work is nicely matted and framed in excellent condition.