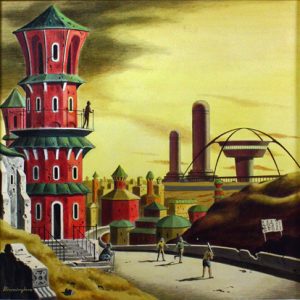 An eerie and post apocalyptic Los Angeles cityscape appears in this original pulp painting by Lloyd Birmingham used as the cover for "Analog - Science Fact, Science Fiction", Feb. 15, 1962. Dating both the birth of the era of space exploration (John Glenn would become the first American to orbit the earth one week after the appearance of this issue) and anxieties about the foreign menace of the Cold War Soviet Union, this painting imagines a Los Angeles which has been occupied by aliens and left to rot until it is merely a spaceport for a backwater planet."

Woman on Horseback in Autumn