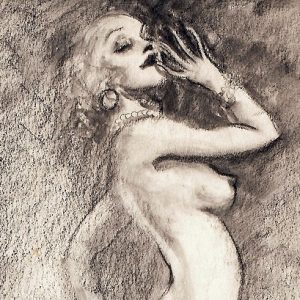 A comical yet masterful charcoal illustration titled “The American Girl and Why” by gifted and prolific New York City illustrator James Montgomery Flagg. This bawdy nude was likely used to illustrate a 1930s edition of the Lamb’s Club Monthly Magazine. The Lamb’s Club was established in 1874 as America’s first professional theatrical club. Renowned artists such as James Montgomery Flagg, Howard Chandler Christy, Hubert Vos, Robert Reid, and Everett Raymond Kinstler created paintings for this fraternal group that fell into two general categories; the Shepherds’ (Presidents’) portraits, and the nudes.

The American Girl and Why