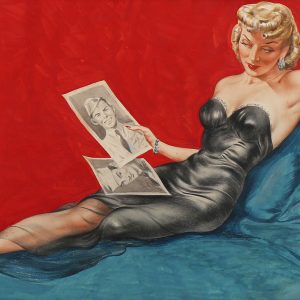 An original World War II era pin-up illustration featuring a Marlene Dietrich – esque lovelorn pin-up admiring her 2 enlisted men presumably stationed in Europe ” over there ” as it were… Classic bad girl campy imagery which was used as art for a Mennon gift box for Men lithographed box for the set which is included in the sale. Signed Bischoff on the box (only, not on gouache artwork itself). This is by Herman E. Bischoff an illustrator that worked for Esquire Magazine and created covers for Liberty magazine during the 1940s – 50s.