A well rendered and precise colorful interior gouache painting by one of our favorite art deco-era illustrators Herbert Paus that reflects the attention to detail and skill of the artists working during the Golden Age of Illustration. This large signed work depicts a son leaving his family's pastoral cottage by carriage as his grieving mother looks on. A nostalgic look back at the well to do culture of pre-machine age American society. 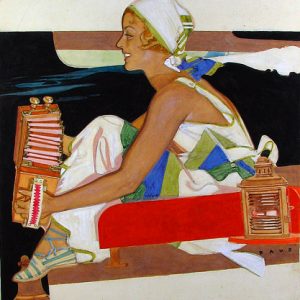 A deftly rendered cover painting for The American Magazine by Herbert Paus, who developed an inventive and entirely modernist, machine age, industrial aesthetic. A striking seaside beauty is depicted playing a concertina in this rare surviving original cover painting from the golden age of American illustration. Herbert Paus was a leading illustrator who contributed covers for Life, Collier's, Leslie's and the Woman's Home Companion magazines.

Seaside with a Concertina 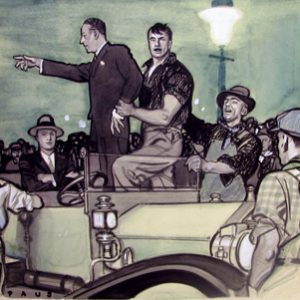 A fantastic WPA-themed interior illustration from the February 1931 issue of American Magazine. A Union president riles up a group of miners for an epic David versus Goliath style battle, from the seat of a stylish touring coupe. Herbert Paus was a gifted and prolific illustrator, known for his highly technical & visionary watercolor industrial illustrations. He designed World War One posters and illustrated numerous covers for Liberty, Popular Science, Life, Delineator, & Collier's magazines. Like Edward Penfield, Paus was for many years an illustrator for Hart Shaffner and Marx clothiers. An enthusiastic modernist, he worked prolifically creating defining and iconic images of American industrialization. His commissions included Goodyear Tires and Willy's Automobiles.