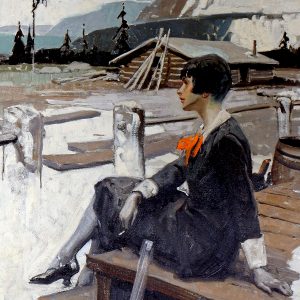 This large and evocative interior illustration by Herbert Morton Stoops was commissioned by Cosmopolitan magazine to accompany a story titled “Swans Mate” which appeared in the September 1925 edition. The briskly composed Western frontier scene shows a wild west culture war where a citified young lady encounters a rugged cowboy on the edge of the frontier. The grizzled ranch hand is either amused or annoyed with the pert, […]