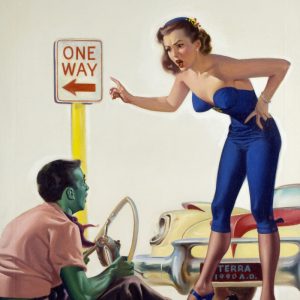 This original oil on canvas painting, used as the cover for the January 1955 pulp digest,  Imagination – Stories Of Science And Fantasy, offers a whimsical mid-century futuristic look at the then far-off year of 1990. The 1950s were abundant with delightfully optimistic and utopian visions of what future life would look like – works like […]