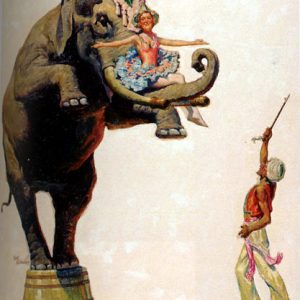 This large original circus motif oil painting was painted by famed illustrator Karl Godwin for Ethyl Gasoline captioned … ” Ethyl controls The Giant Power Of Gasoline … ” And is signed lower left. Godwin was a painter, illustrator and etcher from Canada who studied with Charles Hawthorne and Sigguard Skou, at the ASL of New York City. An August 27, 1932 issue of Liberty Magazine with this piece as the inside cover advertisement is included in the sale.