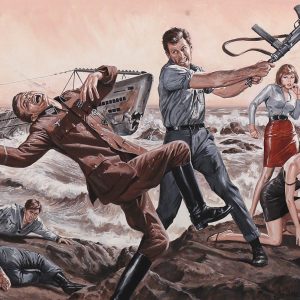 An explosive World War II battle scene rages in this published Bruce Minney illustration. A Nazi submarine has crashed ashore and brought the fight to land in this lurid piece that is a quintessential example of the style coming out of men's magazines of this period. With three U.S. Navy soldiers wounded and down for the […]