At the turn of the 20th century, Industrial Revolution inventions brought technological advancements to printmaking that ushered in a Golden Age of American illustration. Publishers and calendar companies developed new techniques for producing multi-color offset lithographs that were fast, affordable, and flat-out glorious to view, blurring the distinction between fine art and "art for commerce." The best examples by the finest commercial illustrators were revered by the public, and today are beloved by collectors.

Calendar art by Philip Boileau By the time Philip Boileau created this pastel on board calendar illustration, he was already one of the most popular “pretty girl” postcard artists working. This example, which was copyrighted under the title Lady In Blue features a blue-eyed Edwardian maiden looking over her shoulder daringly at the viewer, and is […]

Redbook Cover by Haskell Coffin This romantic and dreamy pastel by the important pretty girl illustrator Haskell Coffin appeared as the cover of the July 1923 edition of Redbook magazine. In the 1920s, Redbook was one of the premiere fiction magazines in the country, with stories by authors ranging from Jack London to Edith Wharton. […] 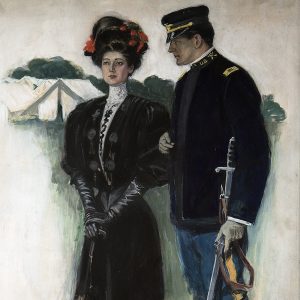 The Girl of the West 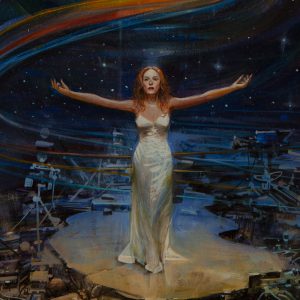 Madonna in 1998 by John Berkey This original casein on board published illustration painting shows the singer Madonna as a celestial being standing in the middle of a classic John Berkey starscape. With her arms outstretched, she appears to bring light to a universe filled with space junk. The illustration was created to accompany an […] Milady Beautiful, calendar art by Edward Eggleston This is an enchanting oil on canvas painting by artist and illustrator Edward Eggleston. A beguiling Jazz Age fantasy image, this portrait features a rosy cheeked flapper girl draped in a floral piano shawl. Seated in an arched window, she takes in the moonlit sky. A skillfully rendered […] 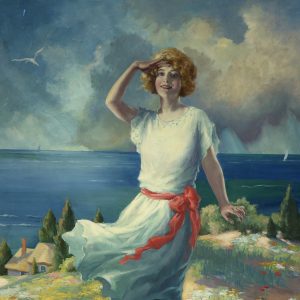 Seaside Country Flapper Girl by Bertram Basabe This is a beautifully colored gouache painting by English-American illustrator Bertram Basabe. A bucolic early 20th century offering, this painting features a lovely country flapper girl with hay colored hair and rosy windblown cheeks. Standing in a field of wildflowers, this beauty holds her hand up to her […] Hearst’s magazine cover art portrait by Penrhyn Stanlaws Soft and delicate, this pastel portrait by Scottish-American artist and illustrator Penrhyn Stanlaws captures the dainty beauty of an Edwardian society girl. The fair, rosy-cheeked brunette is draped in sheer fabrics and wears a sheer pink garden hat as she takes an afternoon stroll through a vibrant […] This pastel of Carole Lombard by Ed Dow was created as cover art for a 1930s Hollywood movie magazine. Original illustration at Grapefruit Moon Gallery.